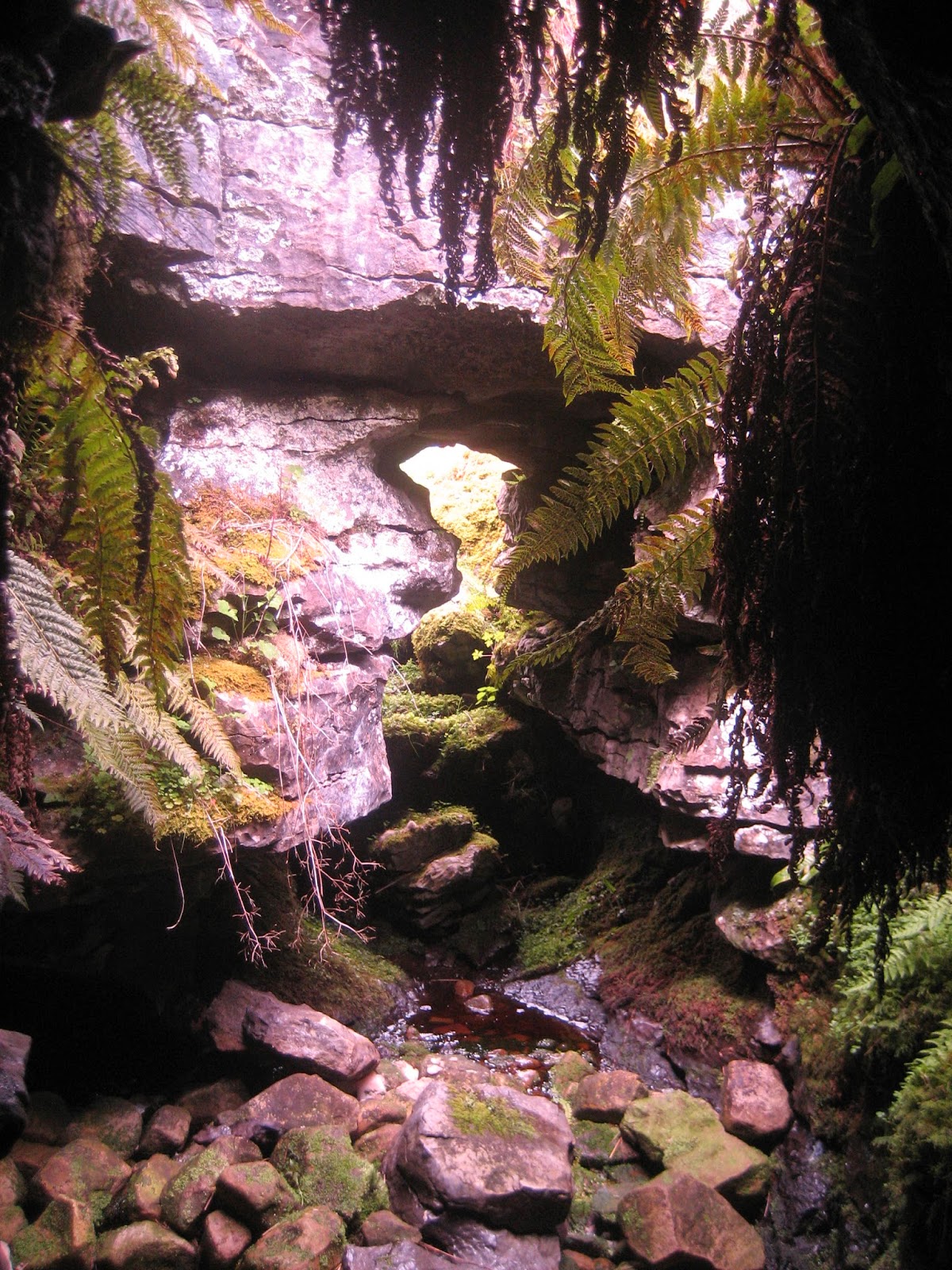 Fine limestone sculpture at one of the false entrances to Cuddy Gill Cave, close to the Yoredale/Great Scar Limstone boundary at Ribblehead. Stephen Oldfield

In contrast to the many deep potholes and shafts surrounding the Ingleborough massif, where the Great Scar Limestone is scores of metres thick, at Ribblehead the caves are formed in shallower limestone; often sinking in the Hawes and Hardraw Scar Limestone of the Yoredale Series before meeting the more substantial Great Scar Limestone underground.

The caves are shallow for a number of reasons.  Here there is a comparatively low surface relief compared to elsewhere around Ingleborough, the horizontal shale beds are well defined – and there is a lack of small faults and joints to encourage deeper entrenchment. 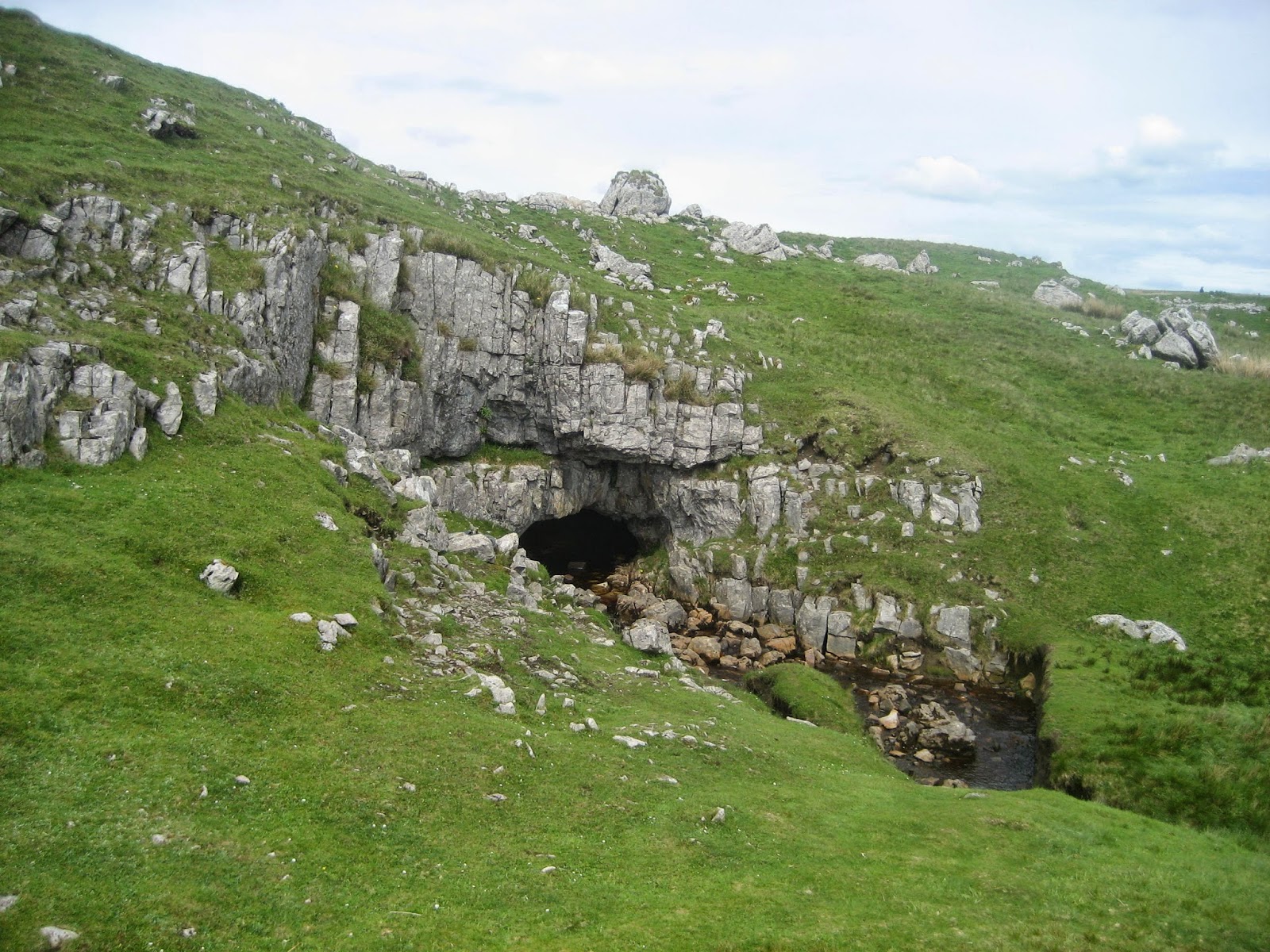 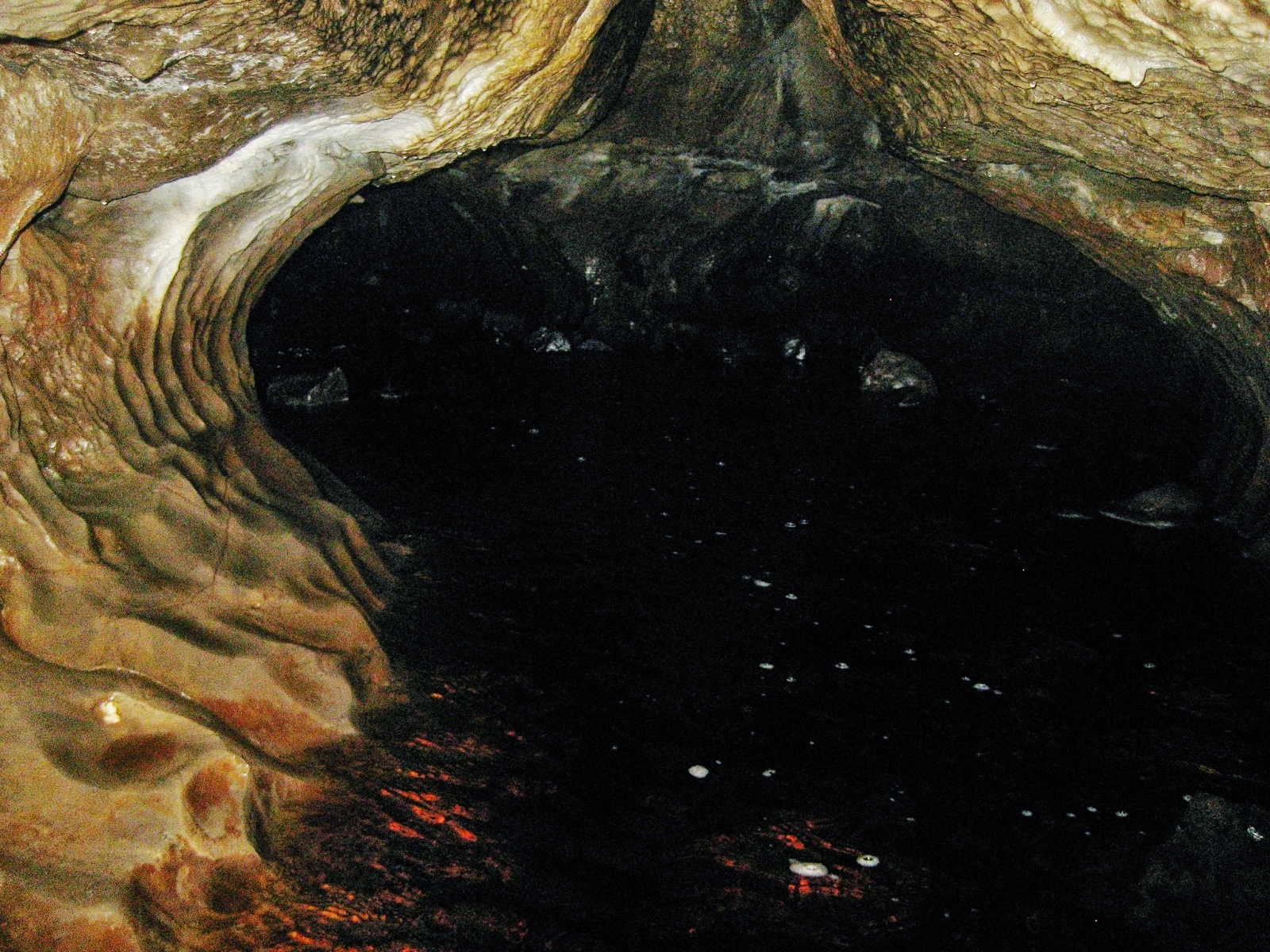 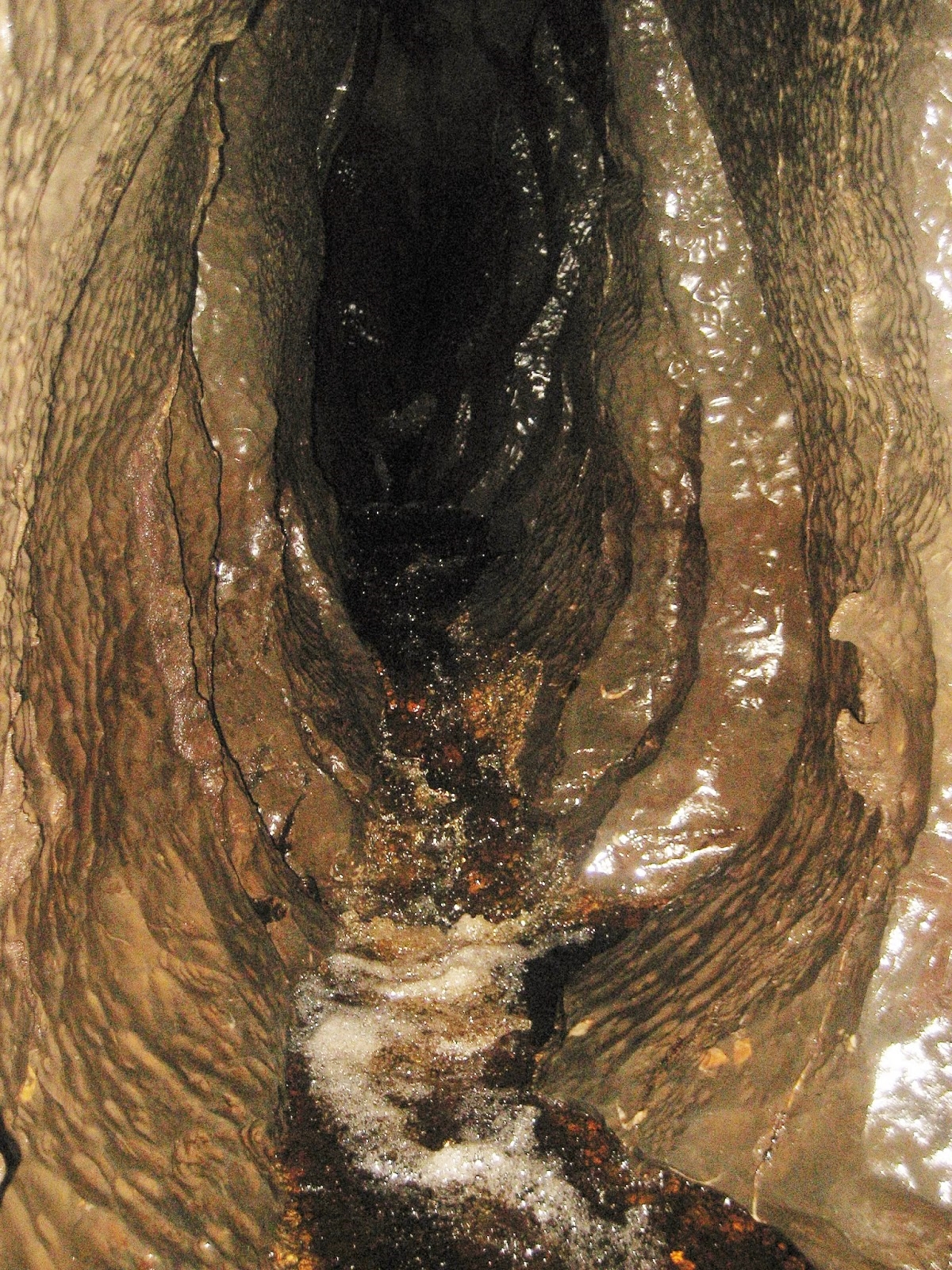 Between drumlins to the east of Batty Moss are some of the best known examples.  Cuddy Gill Cave, on the very edge of the Yoredale/Great Scar Limestone boundary – links via Scartop Cave to Runscar Cave (SD765797), with its impressive vadose stream-way meandering beneath a single bedding plane roof.  In flood conditions some of the water enters the mostly abandoned Thistle Cave, which can be explored through three main sections, the lowest being a tight crawl into a bedding plane leading to a superbly decorated passage (SD764797).  Slightly to the west, Roger Kirk Cave (SD761796) meanders in several sections southwards, with the amusing ‘tube’ providing great fun for cavers, who must tackle it on their back with nose to the ceiling! 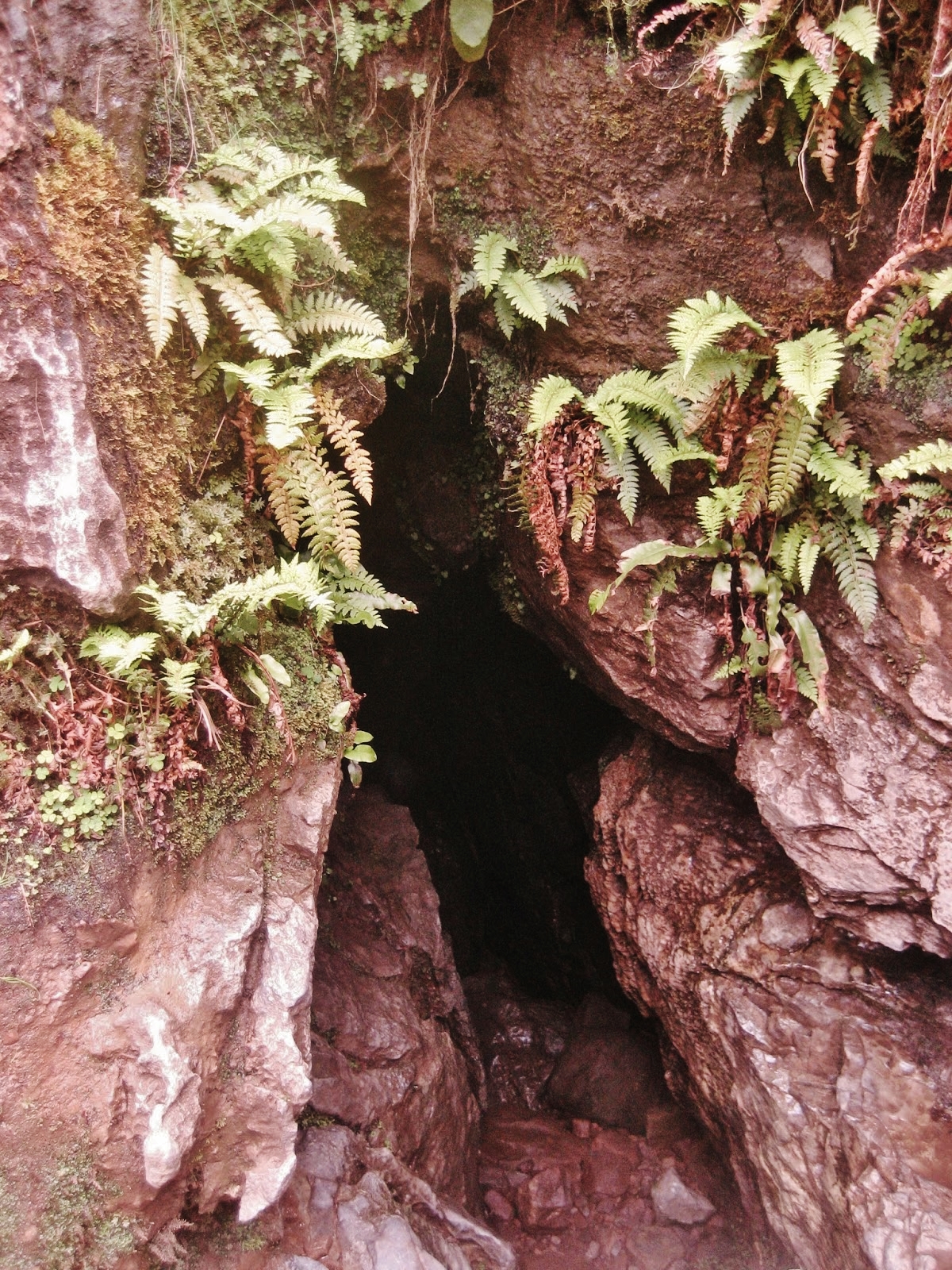 One of the entrances to the largely abandoned Thistle Cave. Stephen Oldfield 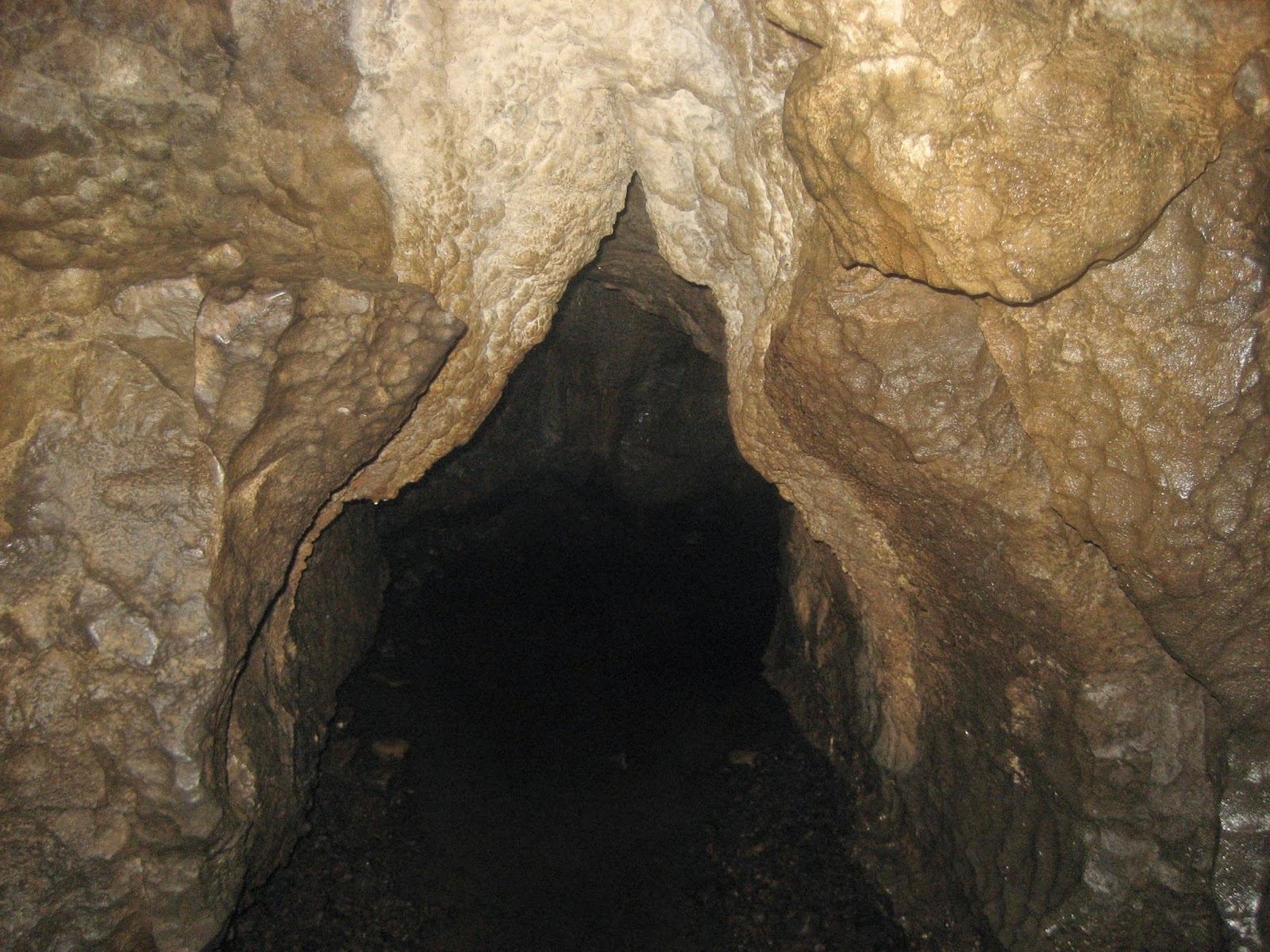 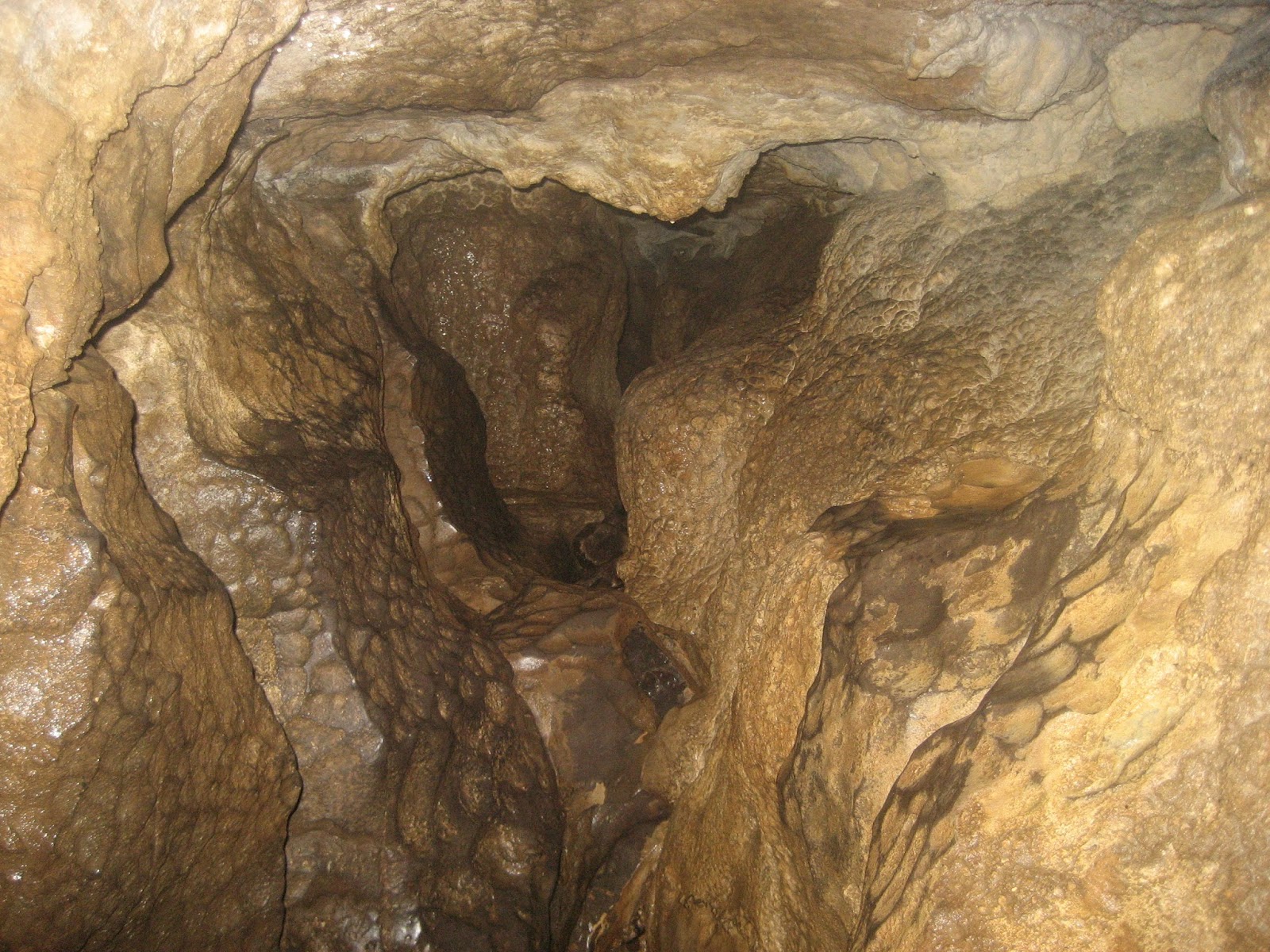 Though these are shallow passages, many looping oxbows at higher level, particularly in Thistle Cave, indicate a pre-Devensian age for at least some of the passages.  Undiscovered links at lower level, from such extensive drainage, are also likely to both the God’s Bridge and Turn Dub risings in Chapel-le-Dale and Ribblesdale, though no dye tests have yet proven this.

The small gorge of Thorns Gill, to the south of the B6255, carries the waters of Gayle Beck – part of the infant Ribble – and at various points some of this water is carried underground.  Above the gorge, the water enters Katnot Cave (SD780797), cutting a superb vadose stream-way beneath a bedding plane ceiling, where red ochre deposits and flowstone features are prominent. 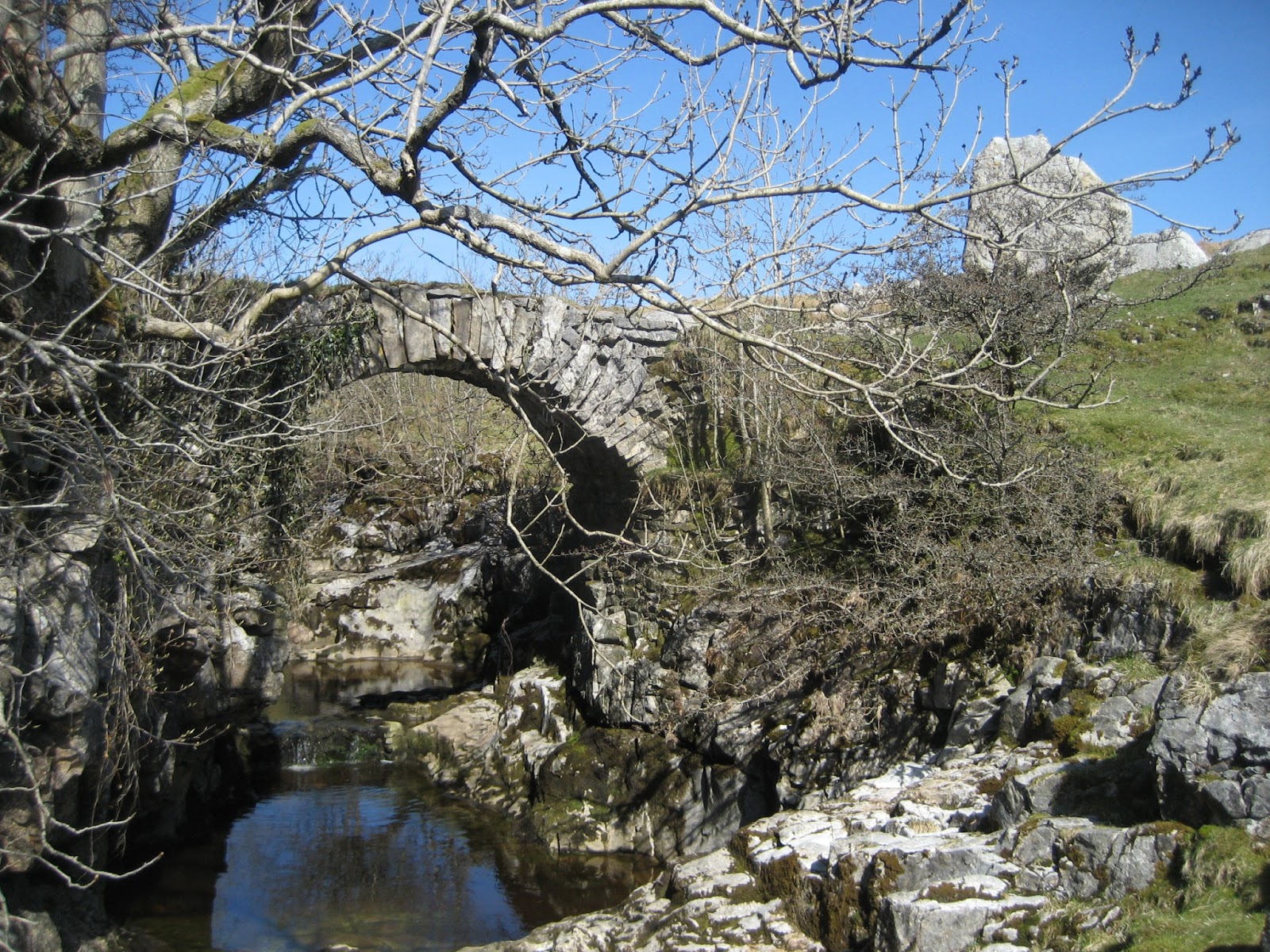 The visually stunning Thorns Gill, spanned by a packhorse bridge and carrying much of the Gayle Beck water – though some finds its way through cave passages along the flank. Stephen Oldfield 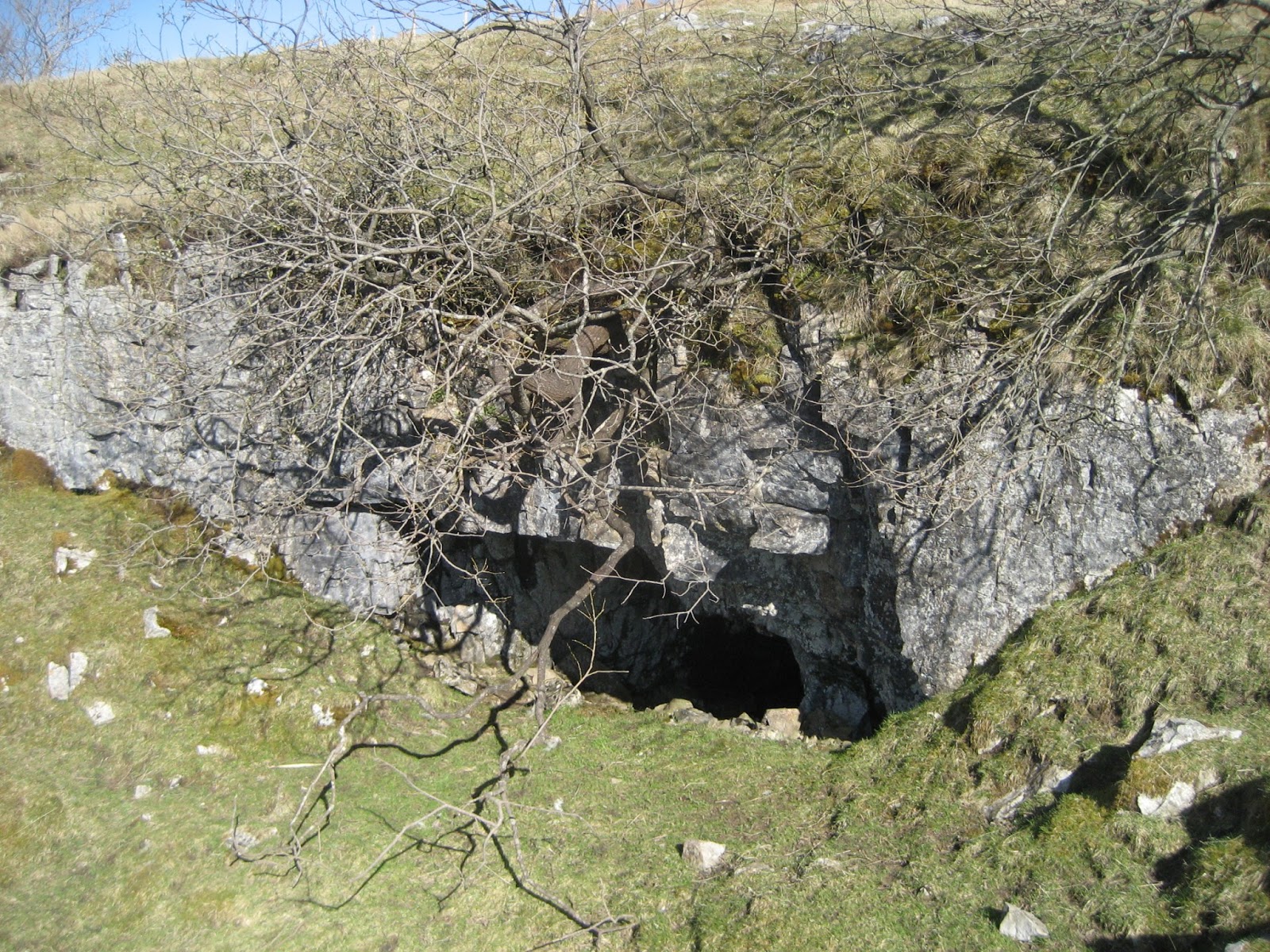 Katnot Cave high on the eastern bank of Thorns Gill with its red ochre stained stream passage (below). Stephen Oldfield 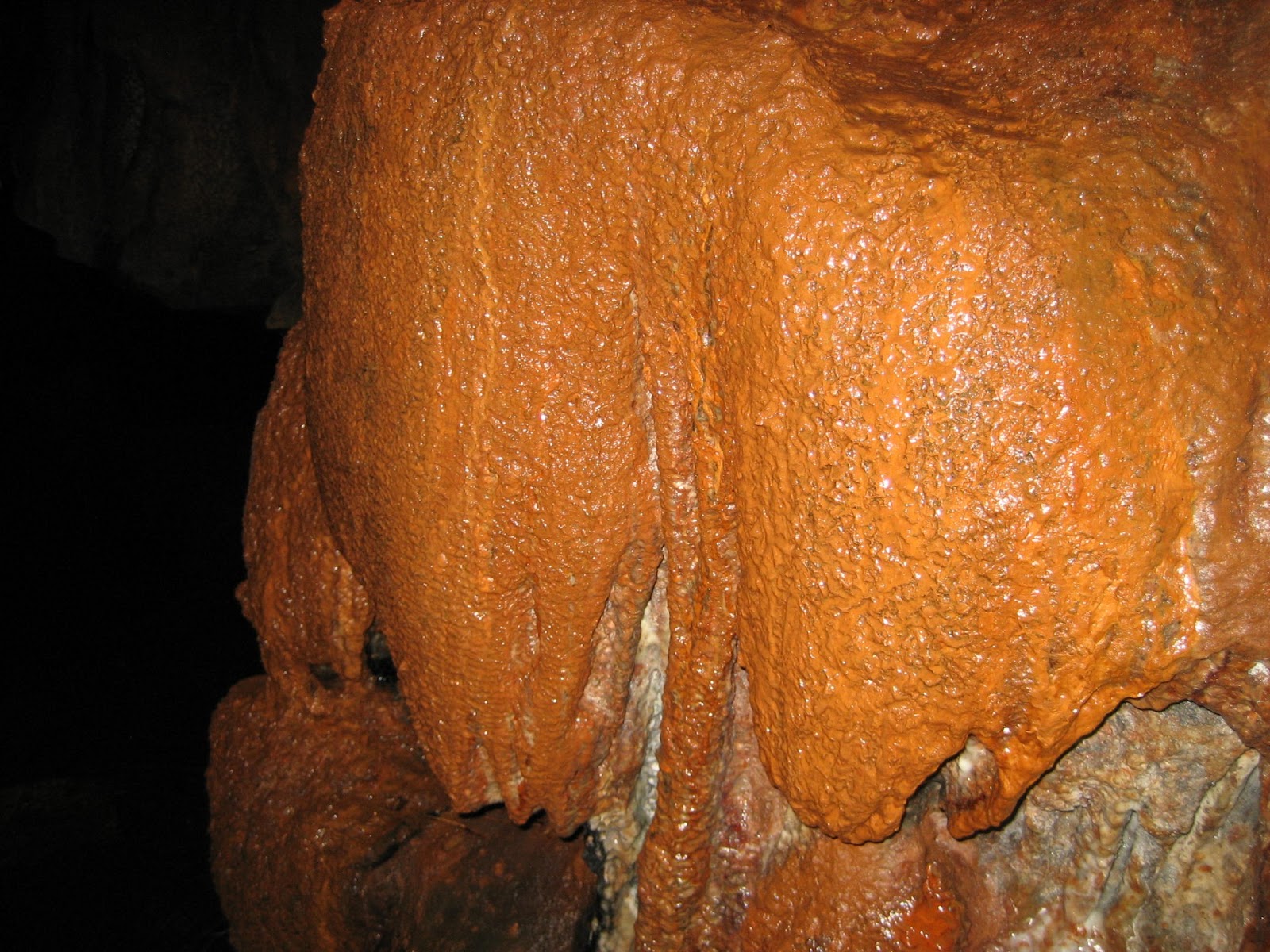 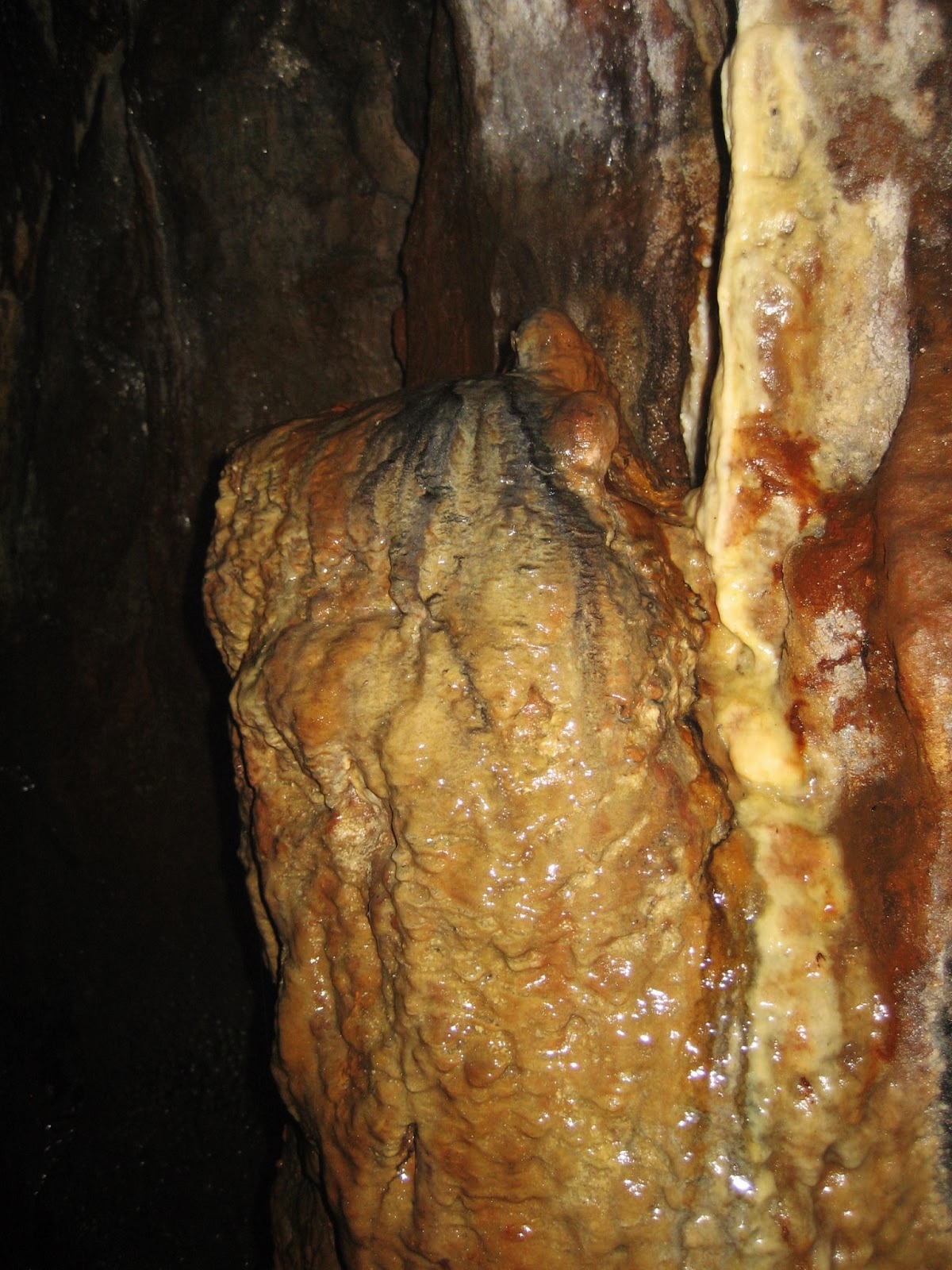 Katnot Cave has a wealth of flowstone formations – including the Katnot squirrel. Stephen Oldfield

Further down the gorge, part of the water is swallowed by the impressive Thorns Gill Cave (SD778795), which is often seen choked by branches and other flood debris.  This dramatic and very active cave eventually emerges at Thorns Dub Hole (SD777793) – though after about 200 metres the passages are totally flooded and blocked by debris. At the opposite side of the gill, and about half a kilometre further upstream, Holme Hill Cave brings a tributary into Gayle Beck.  The cave was once on show to the public and remains of an iron gate can be seen just inside.   It contains a fine stream passage until becoming too low for comfort. 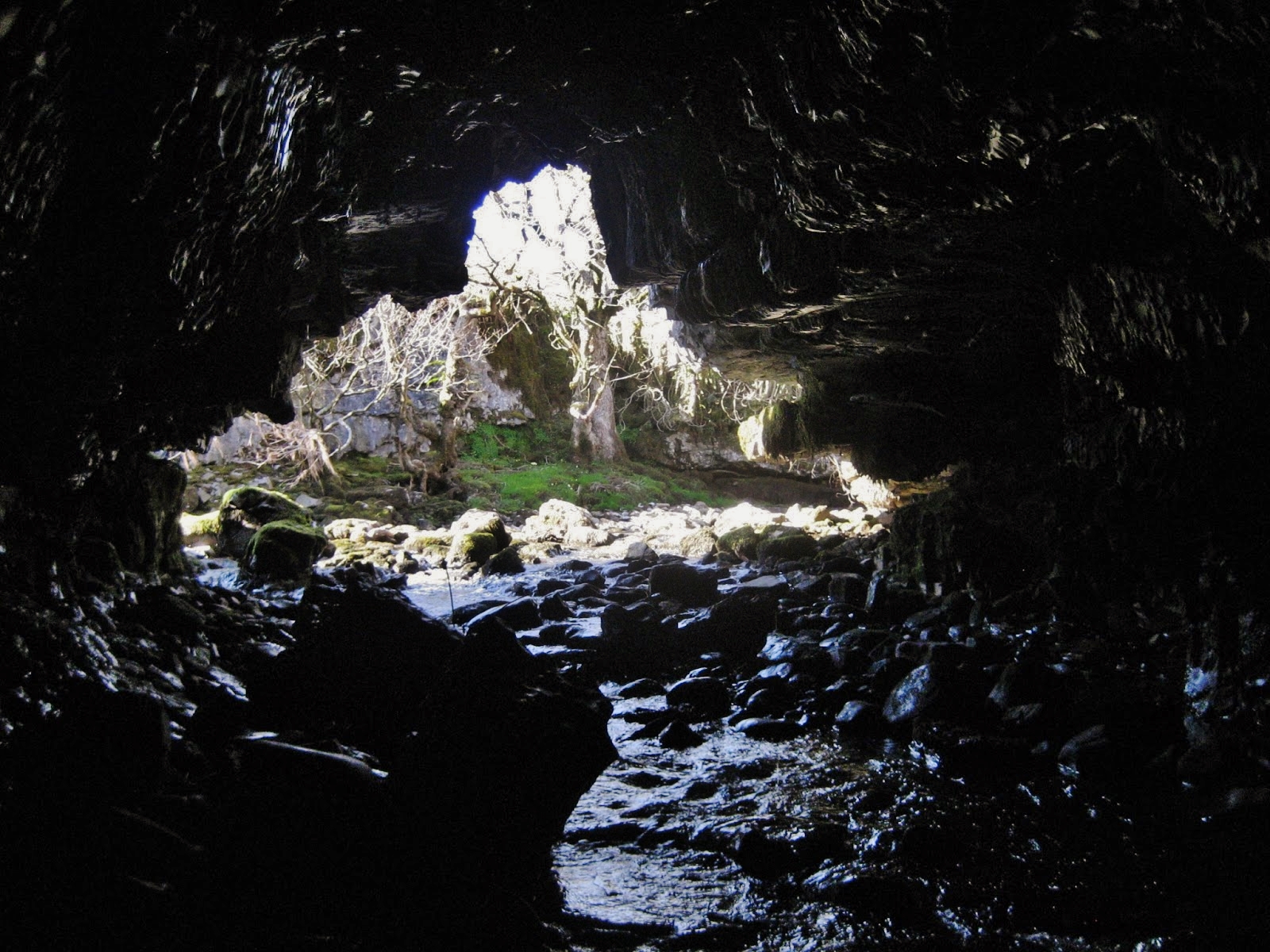 Looking out of Thorns Gill Cave, which swallows part of Gayle Beck and floods in a matter of minutes after heavy rain. Stephen Oldfield

Between Thorns Gill and Cuddy Gill, Winshaw Gill Pot (SD777803) carries water through to Ribblehead Cave (SD777970) and eventually links beyond Thorns Dub Hole to the Ribble. Ribblehead Cave’s entrance has collapsed and is blocked at present, but the cave contains many superb stalactites and other calcite formations 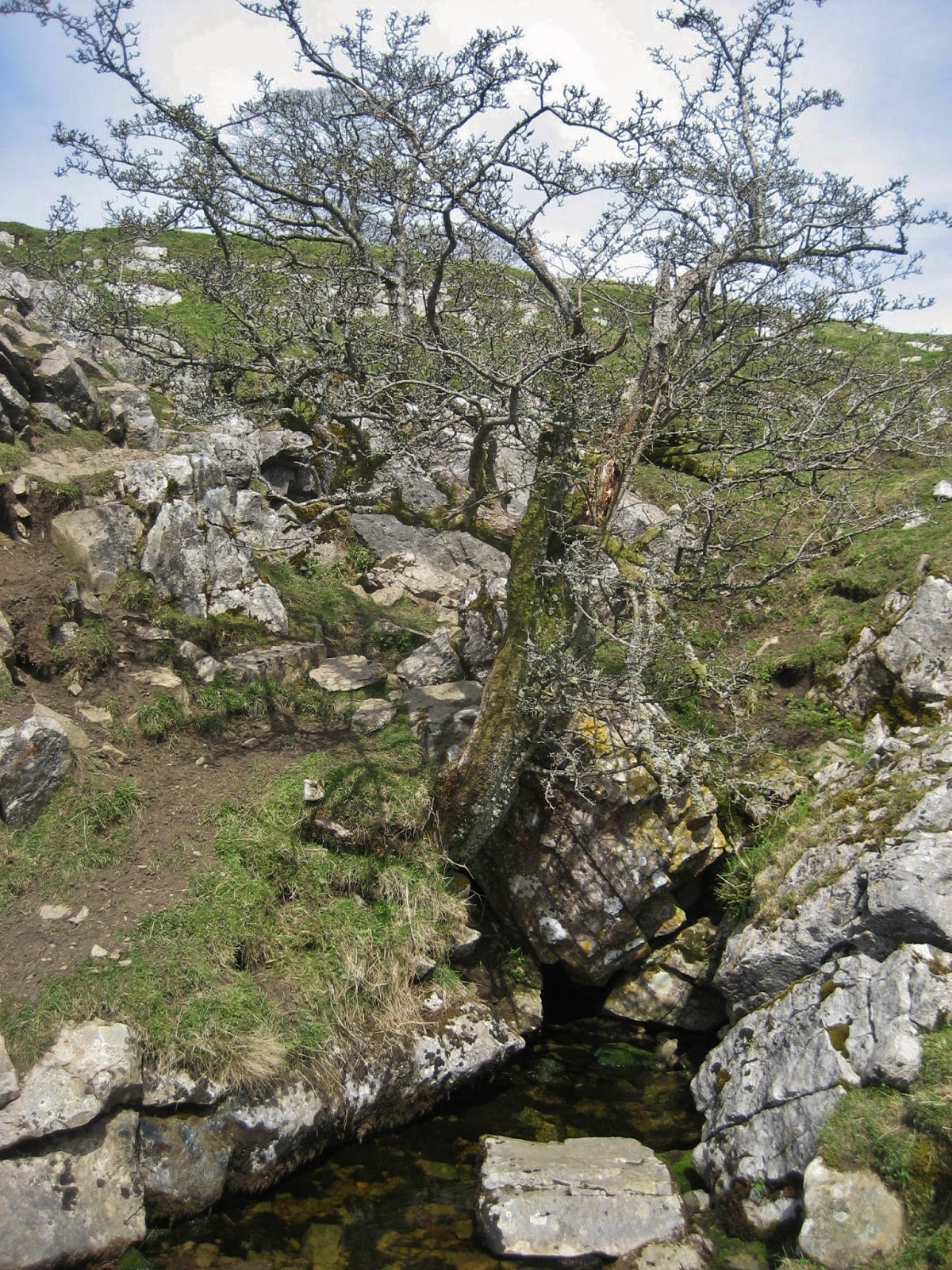 Ribblehead Cave’s entrance is mostly blocked, though excavated passages nearby do allow a tight crawl inside. Stephen Oldfield 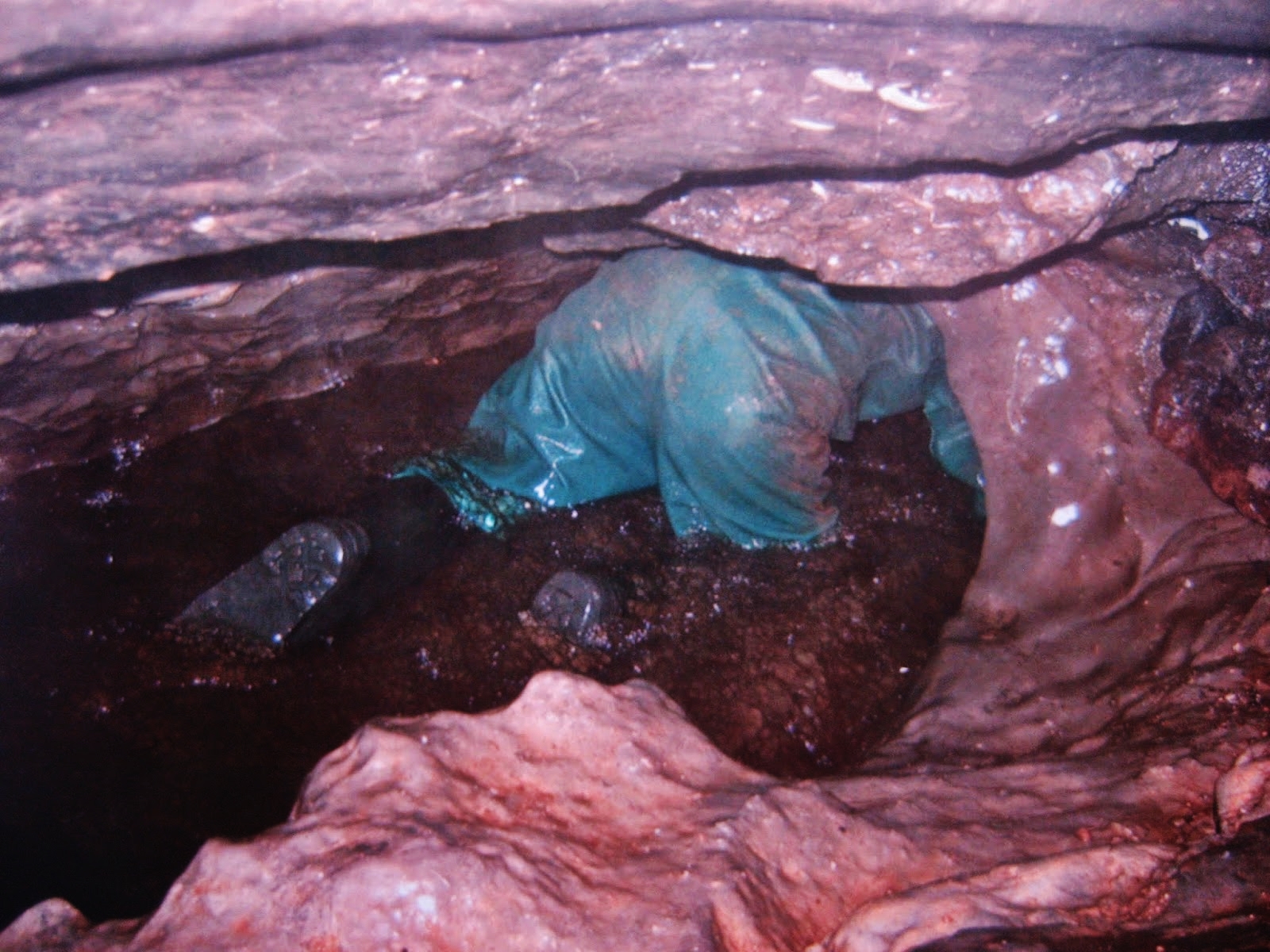 Crawling through the ‘Tube’ a narrow section inside Roger Kirk Cave – often best tackled with a face in the ceiling! Stephen Oldfield