You are here: Home › Westmorland Dales › Life in the Tropics › Sea Change and Cycles

In time the clear tropical sea that dominated the early Carboniferous became increasingly choked with mud, silt and sand brought in by large rivers draining uplands to the north. Vast deltas, similar to today’s Mississippi delta, built far out into the sea, burying the limy sea floor under layers of sediment. Sometimes the deltas built up above sea level and swampy rainforests were established. The soft delta sands and muds eventually hardened into sandstone and mudstone, which now contain features such as ripples and the feeding trails of creatures. The swamps are preserved as rare thin coals, fossil soils and occasional plant fossils. 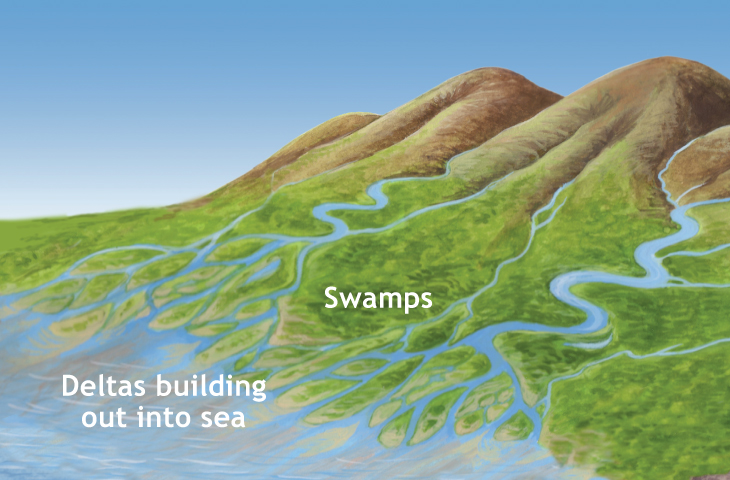 Rivers from hills to the north drained into the Carboniferous sea bringing with them huge amounts of mud, silt and sand, and building up large swampy deltas. © E. Pickett 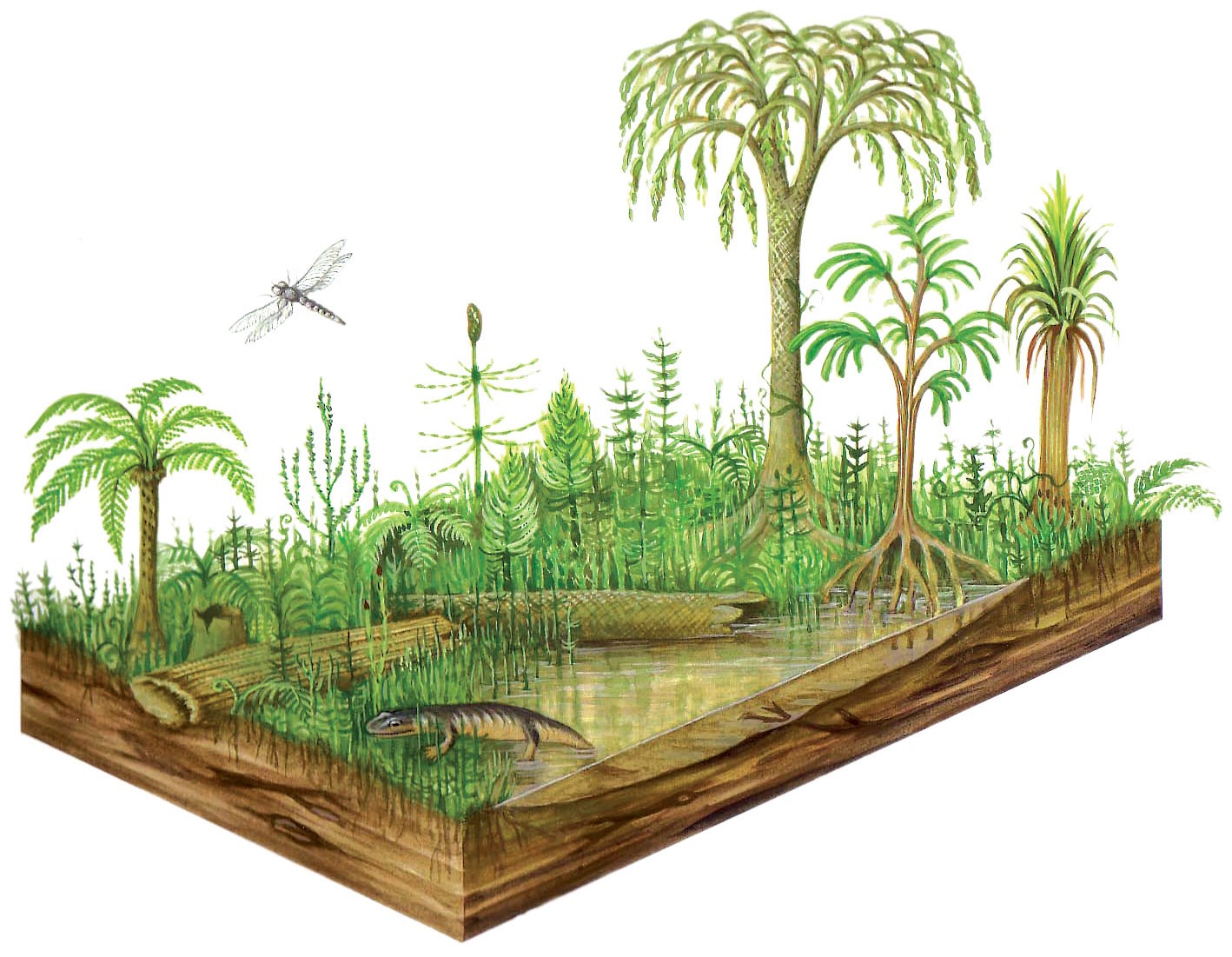 A Carboniferous rainforest, in which the ancestors of today’s clubmosses, ferns and horsetails grew. Giant dragonflies and large amphibians lived amongst the lush swamps. © E. Pickett

But this wasn’t the end of the Carboniferous seas. Over the next few million years, the sea periodically rose, flooding the deltas and depositing limestone again. The deltas repeatedly built out, once again filling the seas with sediment. This cycle happened many times, building up repeating layers of limestone, mudstone, sandstone and rare, thin coals. These cycles, known as ‘cyclothems’, make up the Yoredale Group rocks of the northern Westmorland Dales. The word Yoredale is the old name for Wensleydale, where these cyclic sequences were originally studied in detail. A typical complete cyclothem comprises a limestone overlain by mudstone, sandstone, fossil soil and a thin coal. This cyclic sedimentation was probably caused by a combination of factors, including changes in global sea level as a result of glaciations at the South Pole, as well as local faulting and the shifting nature of delta channels. 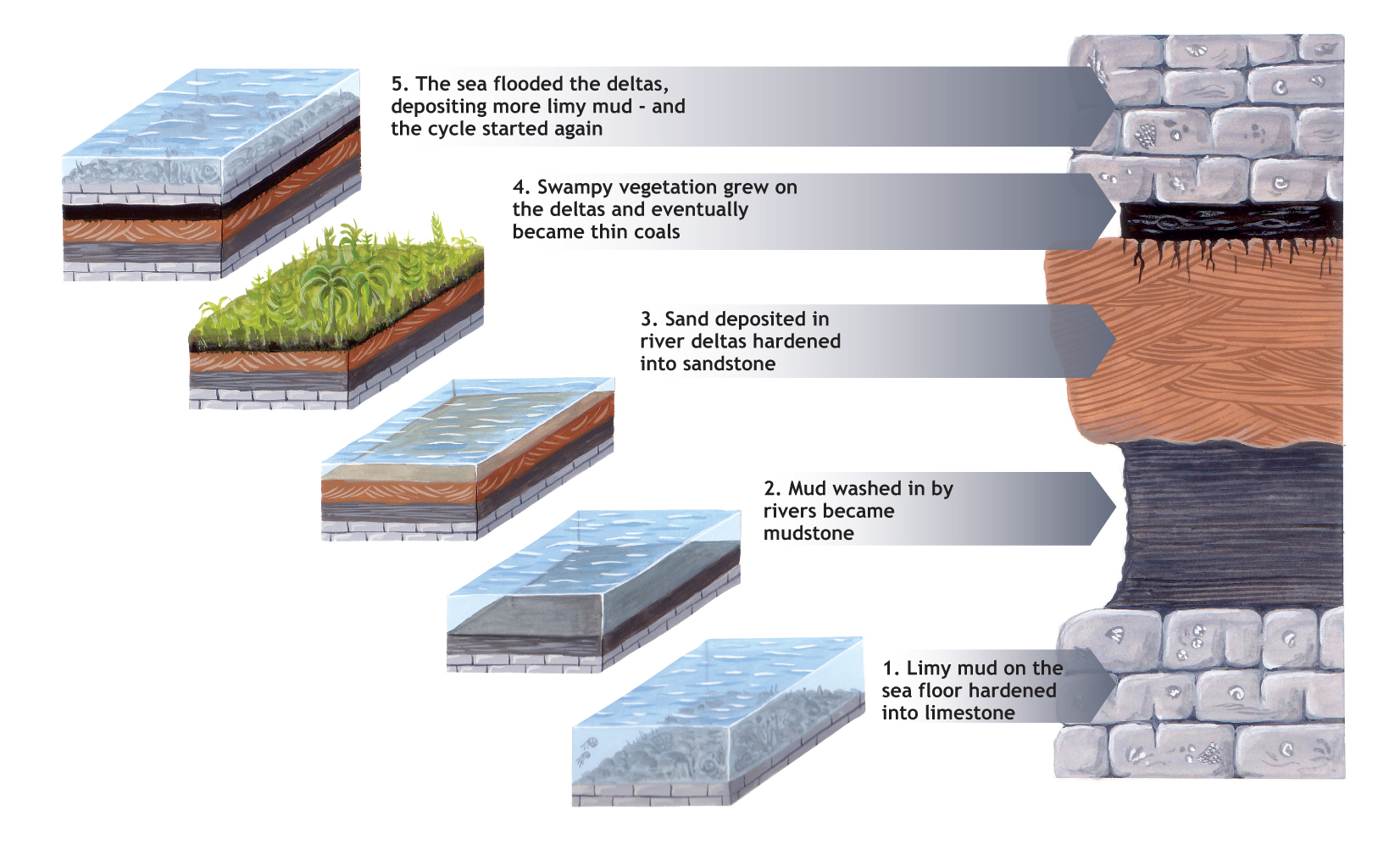 The main rock layers in a typical cyclothem of the Yoredale Group and how they built up in Carboniferous seas and deltas. © E. Pickett 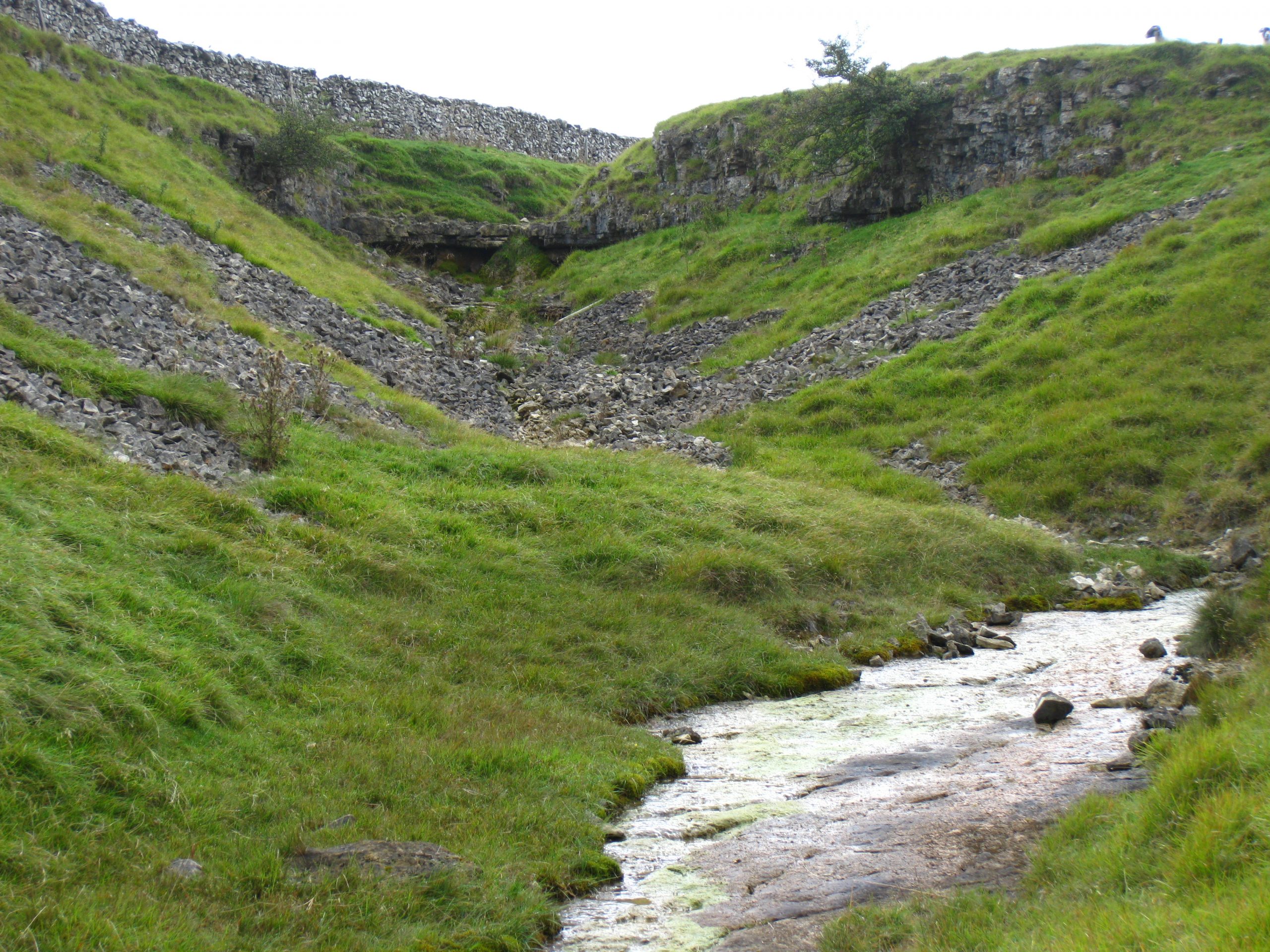 Towards the head of Scale Beck near Gaythorne Hall. The beck displays rocks of one cyclothem and the lip of the small dry waterfall is a limestone at the base of the next cyclothem in the sequence. © E. Pickett

The Yoredale Group is divided into two main units, the Alston and Stainmore formations, of which only the Alston Formation is found in the Westmorland Dales (apart from a small area underlain by Stainmore Formation in the extreme south-east of the area). The Alston Formation is made up of cyclothems, including around ten named limestones, which can be traced across large areas of northern England. Many of these old names are descriptive, reflecting the characteristics or thicknesses of the limestones (e.g. the Iron Post, Five Yard, Three Yard and Four Fathom limestones). The highest unit in the Alston Formation is the thick Great Limestone. However, overall the amount of limestone decreases up the sequence, reflecting less frequent flooding by the sea. 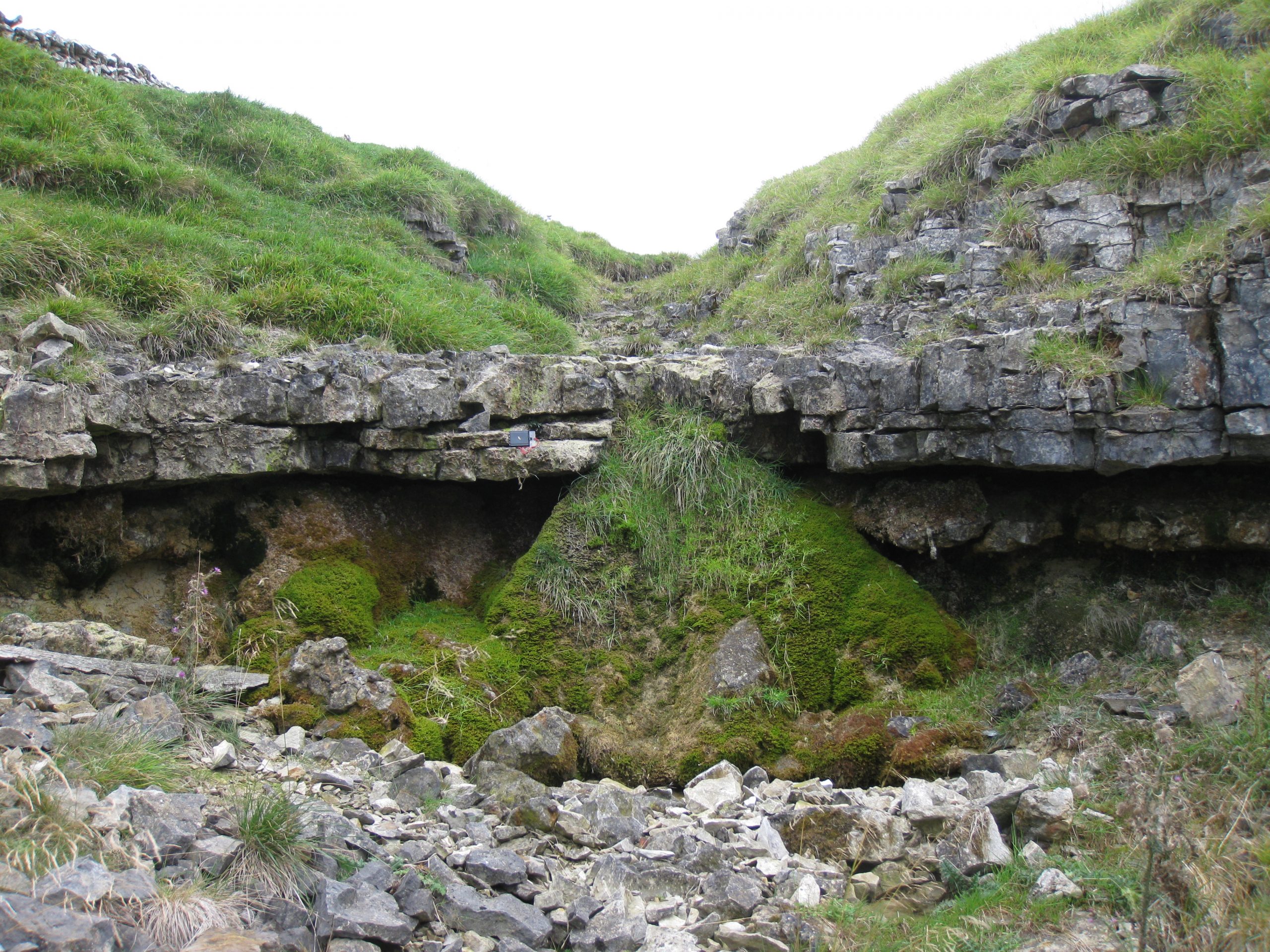 Close-up of small dry waterfall at the head of Scale Beck. The Askham Limestone of the Alston Formation forms the lip of the waterfall. The softer rock beneath it includes sandstone with rootlets, mudstone and a very thin coal. © E. Pickett 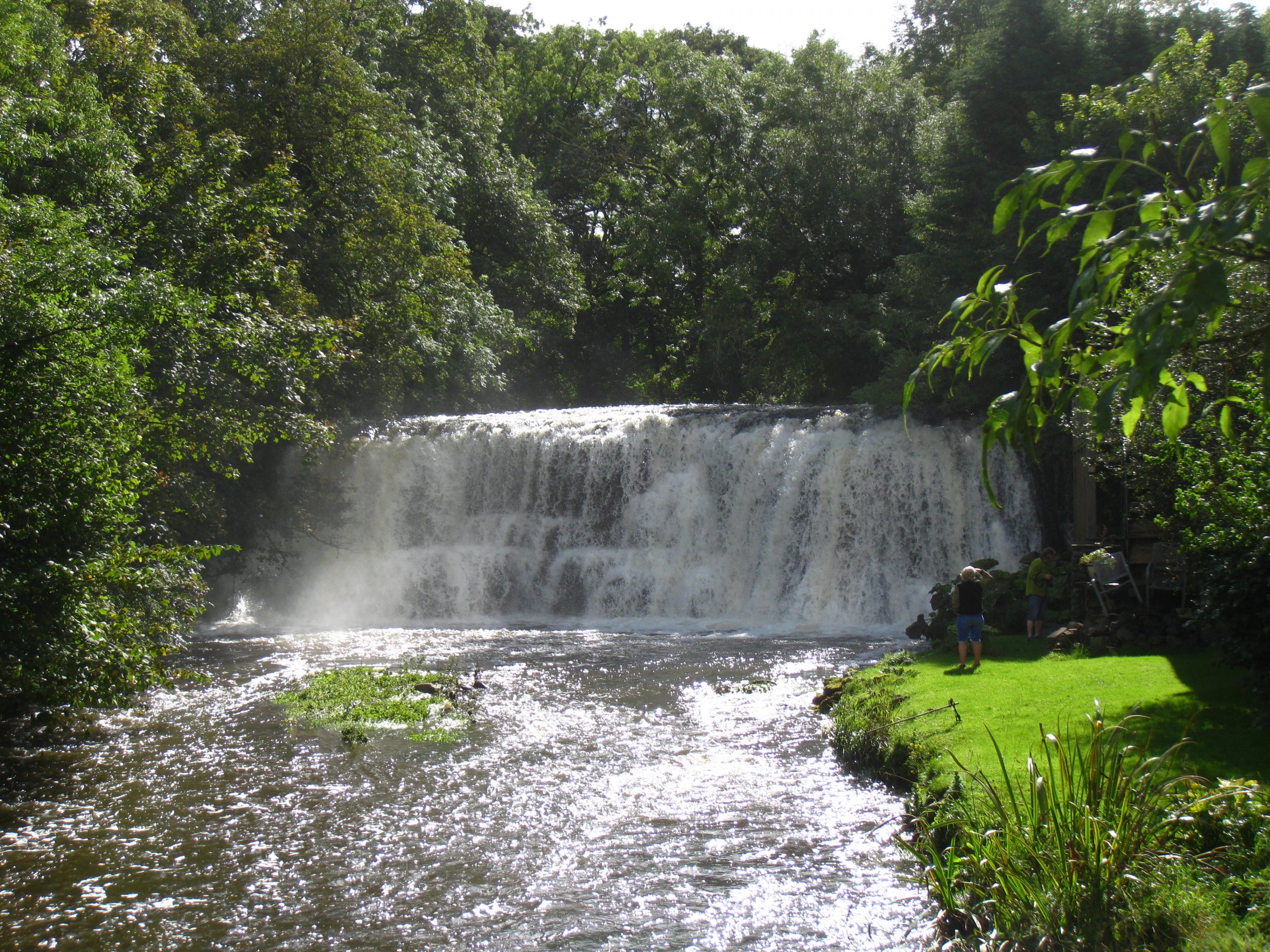