During the Permian, a desert basin, fringed by hills made of Carboniferous limestone, developed in an area that corresponds roughly to the present-day Eden Valley. Coarse rock fragments, carried off the hills by flash-floods, accumulated in alluvial fans. These deposits became a distinctive local rock known as ‘brockram’ whose name may have originated as a descriptive name for broken rock. Brockram includes the rock types known as breccia (a rock made of angular pieces of older rocks) or conglomerate (where the pieces of older rock are more rounded), in this case Carboniferous limestone fragments set in red sandy material. There are several layers of brockram in the Permian sequence, all of which are relatively localised deposits. The best exposures can be seen in the River Eden at Stenkrith Park, in the fields west of Nateby and in Waitby Cutting near Smardale. 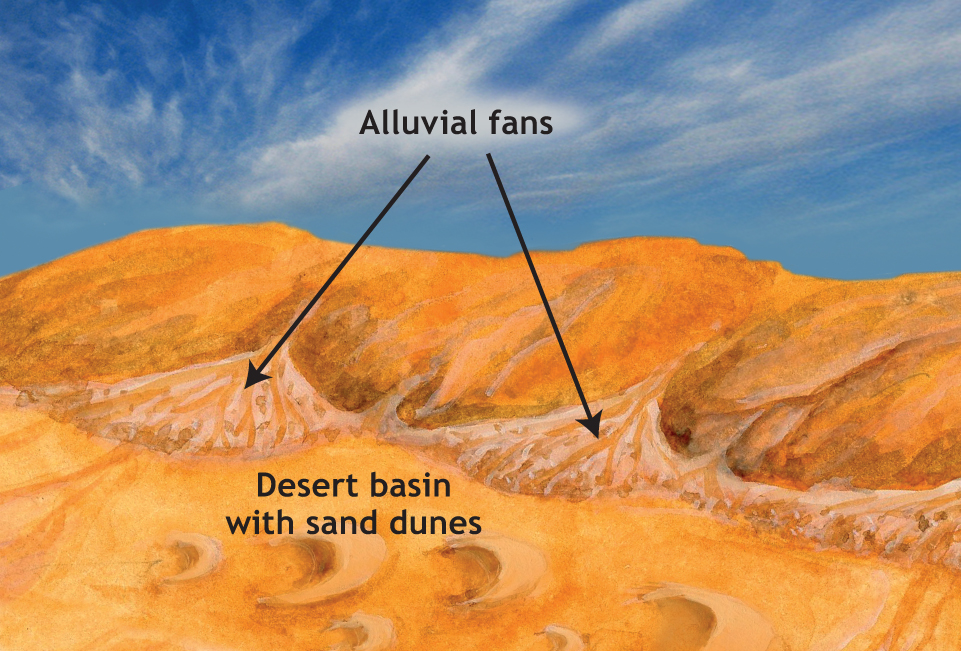 Permian desert landscapes in which brockram formed in alluvial fans along the foot of rocky hills. © E. Pickett 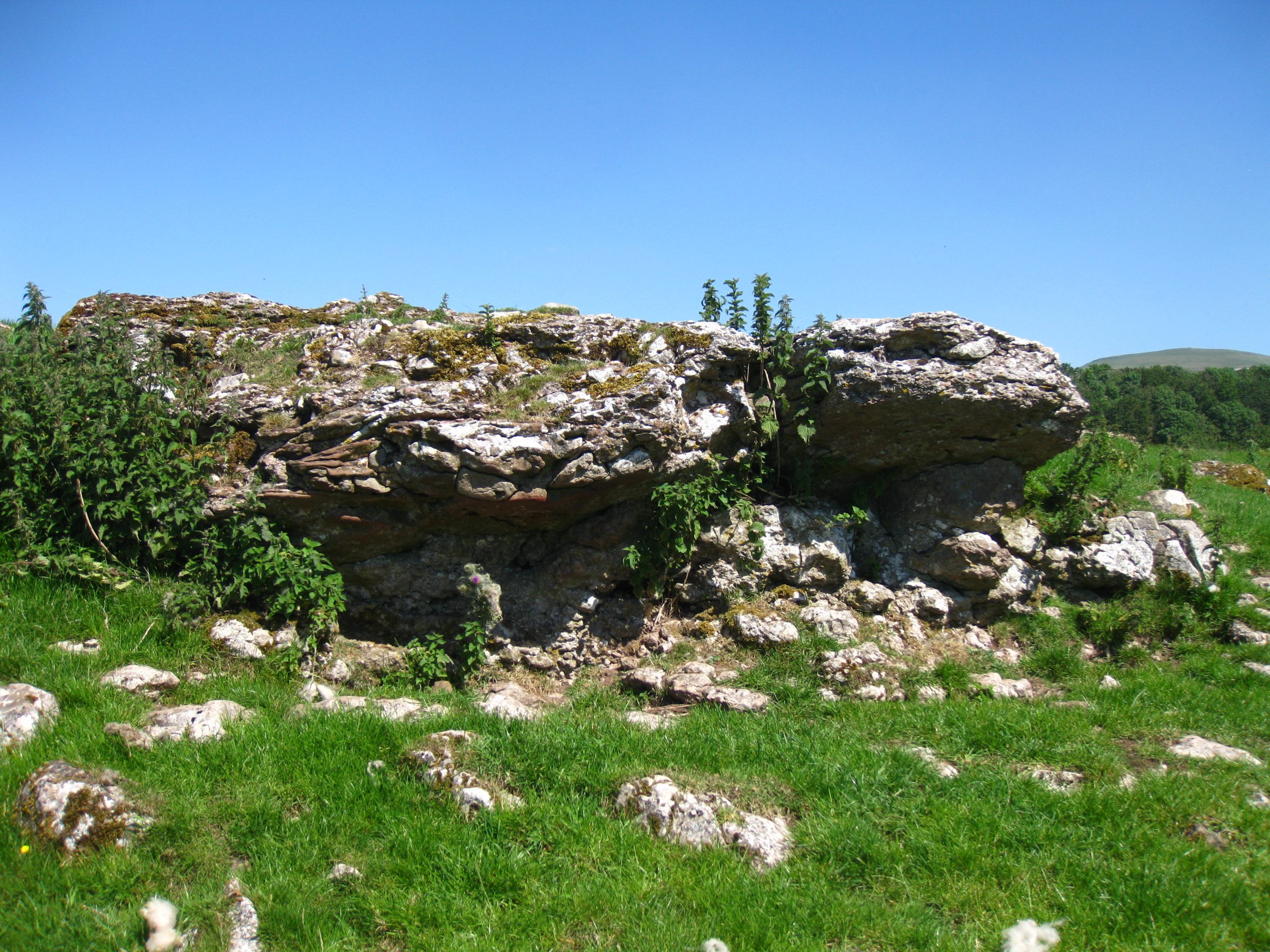 Exposed boundary between Carboniferous limestone (in lower half of exposure) and overlying Permian brockram beside track near Wharton Hall. This contact is an unconformity and represents a time gap of around 80 million years. © E. Pickett 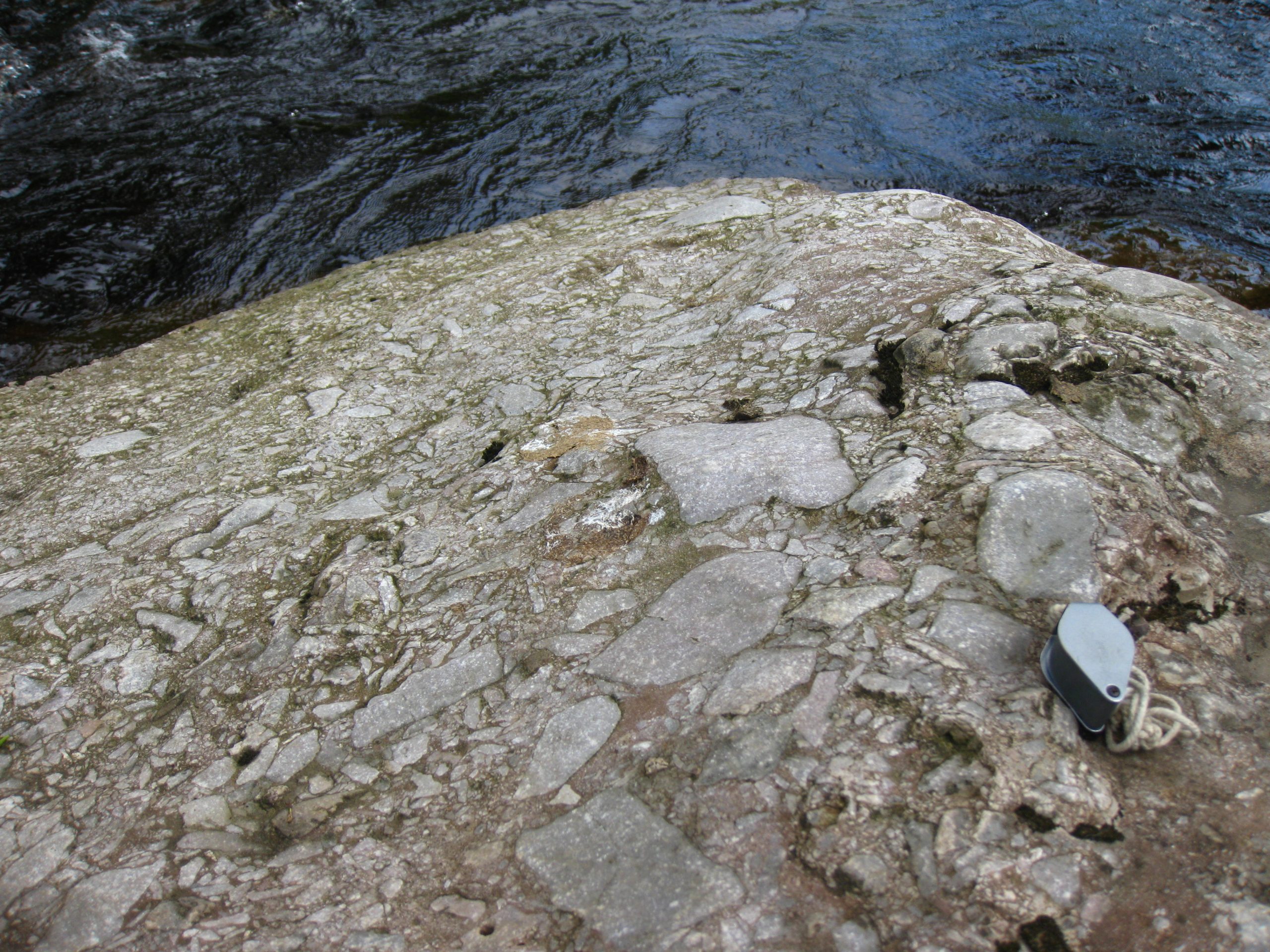 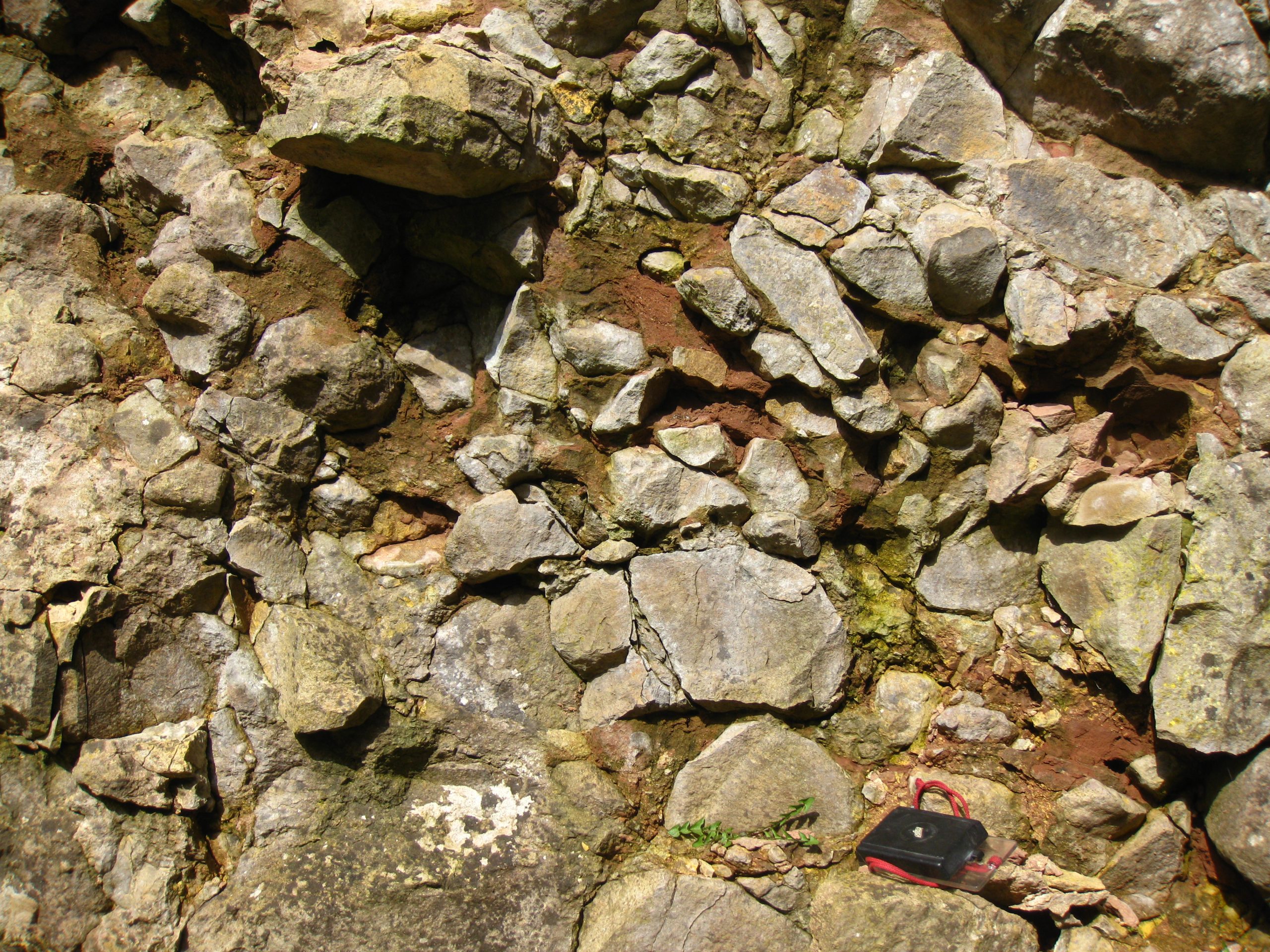 Brockram made of large chunks of Carboniferous limestone, exposed in Waitby Cutting near Smardale. The brockram here is a localised deposit, which accumulated in a channel in the underlying limestone. © E. Pickett

Away from the hills, large sand dunes developed and eventually became red Penrith Sandstone, which is mainly found in the Eden Valley just to the north of the Westmorland Dales. Its desert origins can be seen in its spherical wind-blasted sand grains and the slopes of dunes preserved within the rock. Mud and salt flats from desert lakes are preserved as the Eden Shales. 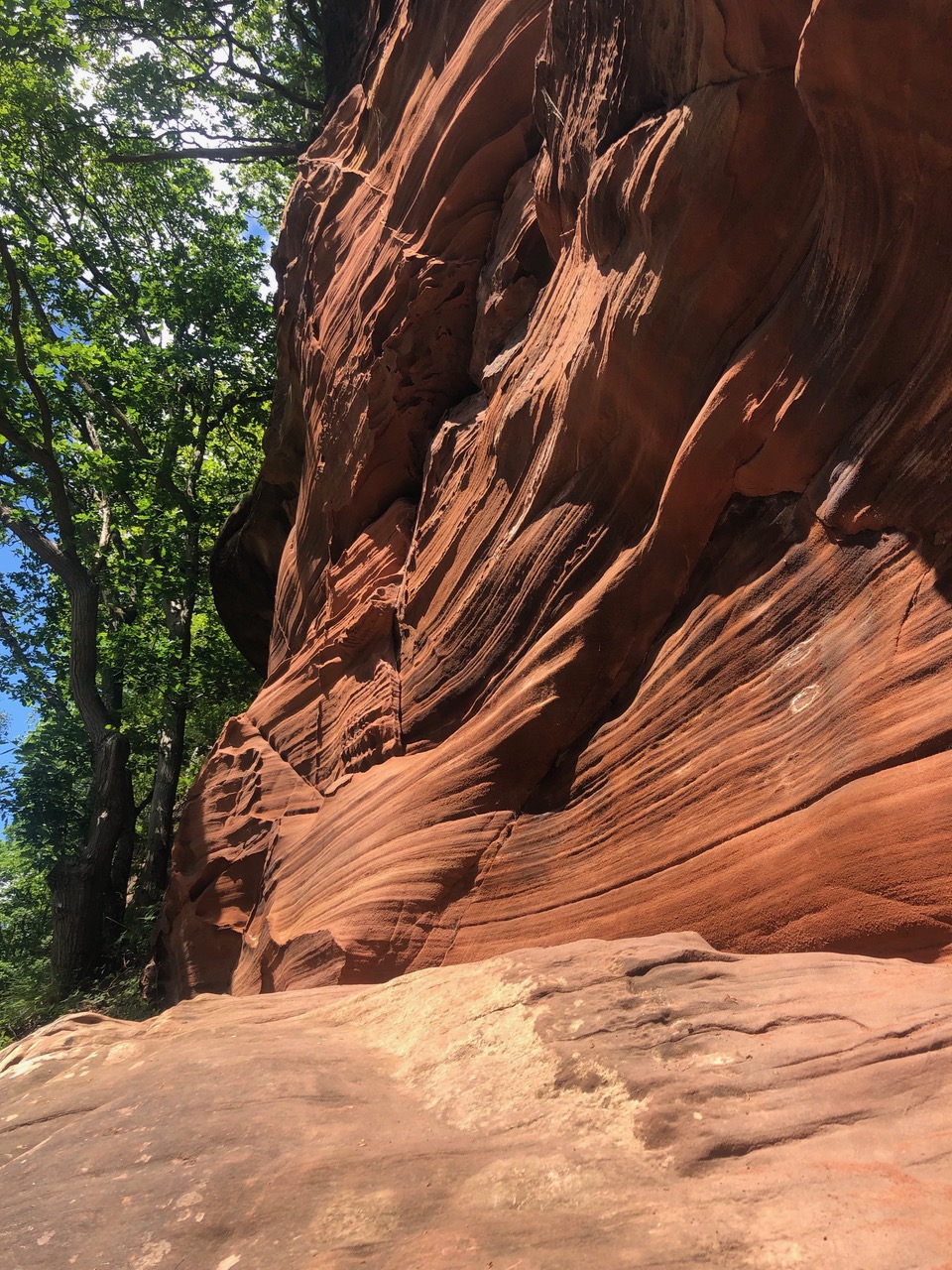 In Crosby Ravensworth the ‘Millennium Stone’ outside the church is a circular slab of red Penrith Sandstone brought here from a quarry near Lazonby. It is thought to represent a section through a wind-sculpted pillar of rock in a desert. 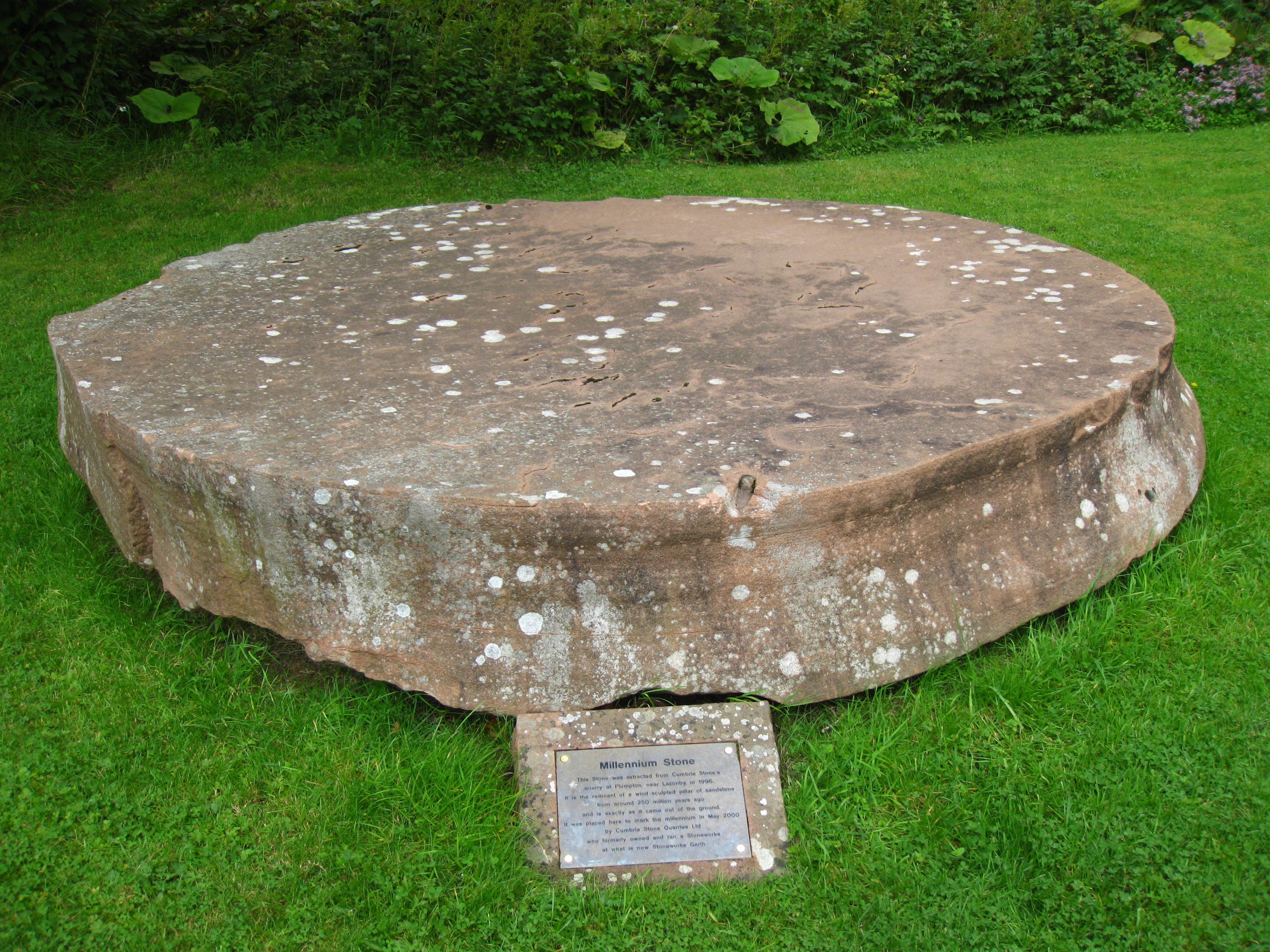 The Millennium Stone in Crosby Ravensworth, made of Penrith Sandstone from Lazonby. © E. Pickett

Later, during Triassic times, large rivers flowed across the desert landscape depositing sand, silt and mud. These sediments became the St Bees Sandstone, also a red rock, which overlies the Penrith Sandstone and can be seen in the River Eden near Kirkby Stephen. 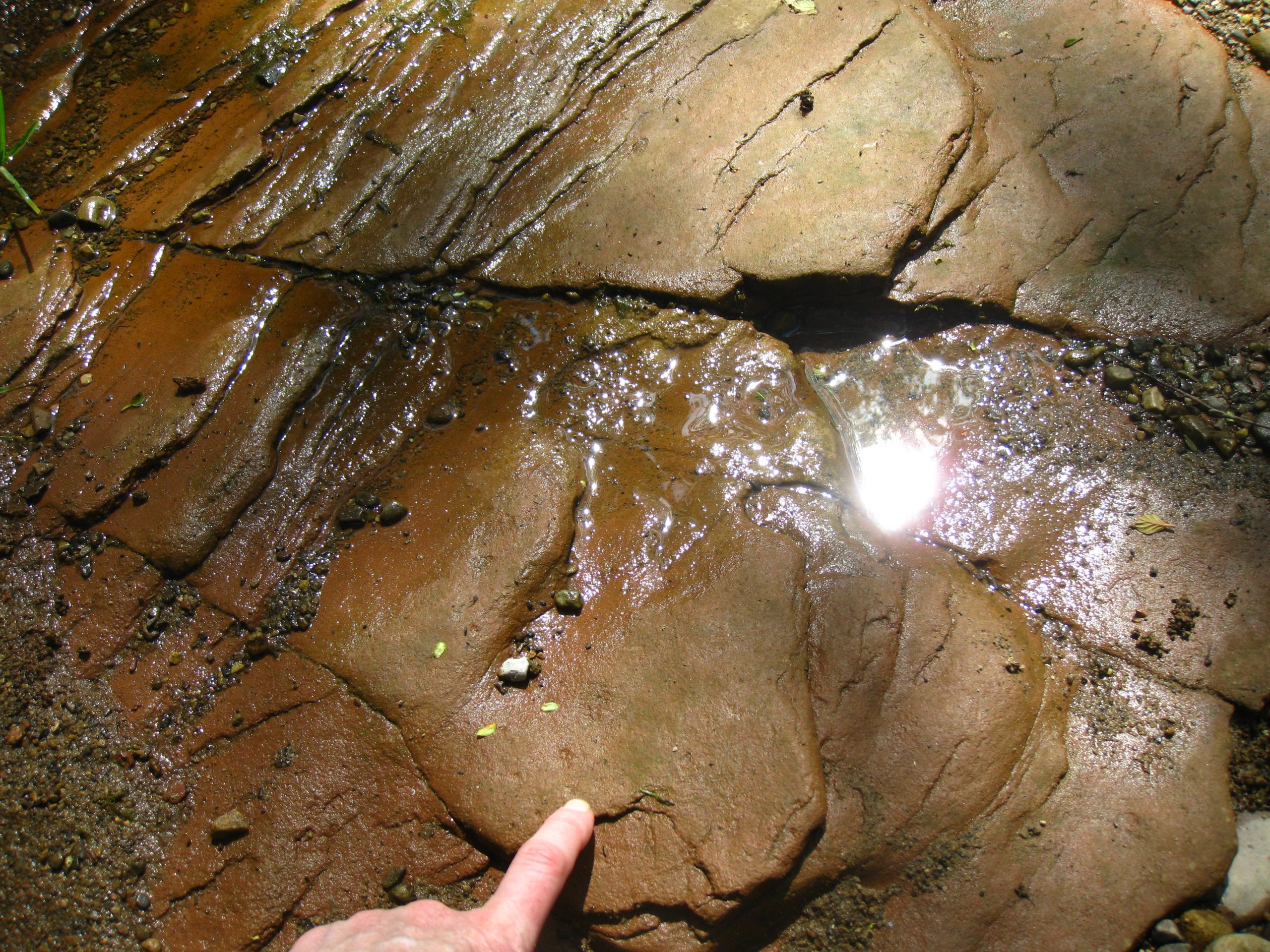