From the Mid Carboniferous, movements deep beneath the earth’s crust along the southern edge of the Askrigg Block led to a series of gigantic fractures, along which the beds of rock moved vertically in relation to one another.  These we know as the Craven Faults, and though many tourists and students know just the north, south and and mid divisions – there are actually hundreds of faults radiating along the main ‘zone’ and causing an amazing variety of limestone features. 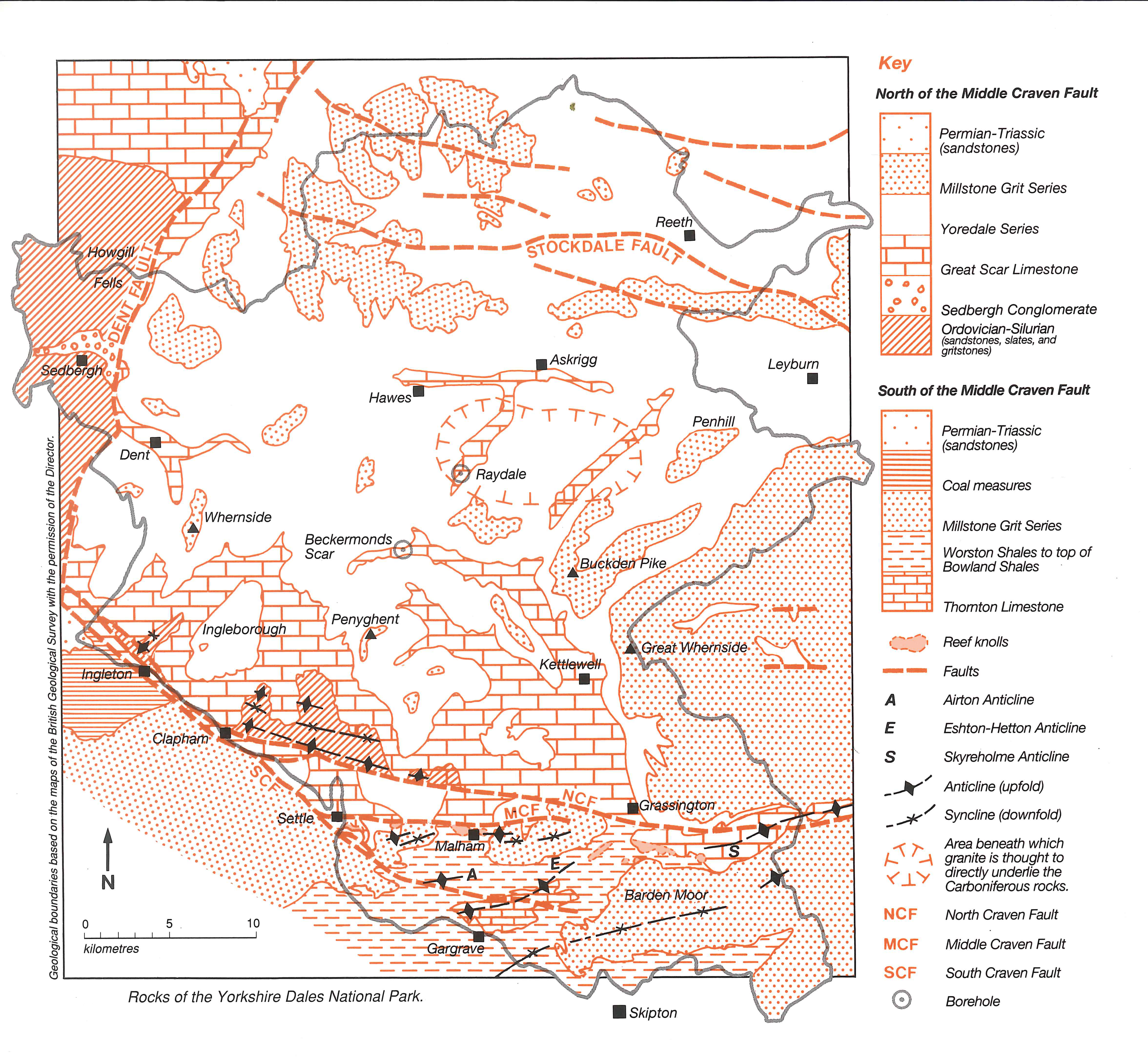 While the Dent Fault running north/south along Barbondale marks the western edge of the Askrigg Block and effectively divides the dales from the ancient rocks of the Howgills and the Lake District – the Craven Faults run mainly north west/south east, separating the classic limestone country from the lowlands of the Craven Basin.  These dramatic underwater movements basically created three massive steps in the sea bed, with smaller steps and undulations surrounding the main fractures to complicate things further.

The first of these ‘steps’ – the North Craven Fault – was created when tectonic activity beneath the fracture effectively lifted the rocks to the north of the fault line upwards, tilting them backwards to the north-east so far that the vertically bedded ‘basement’ rocks were brought to the surface.  At the same time, to the south and west of the fracture, the rocks moved downwards so that those on either side of the fault were shifted 200 metres (600 feet) from their original positions.   This is easily seen on the Ingleton Waterfalls Trail, where the limestone above Thornton Force at Scales Moor lies hundreds of feet above the same rock in Swilla Glen.  The limestone on the waterfalls walk is effectively ‘trapped’ in one huge slab between the North and South Craven Faults. The North Craven Fault actually runs for nearly 50km across the dales, being responsible for the Stainforth and Catrigg Force waterfalls, above Settle, as well as for lifting the basement slates to the surface to hold the waters of Malham Tarn. 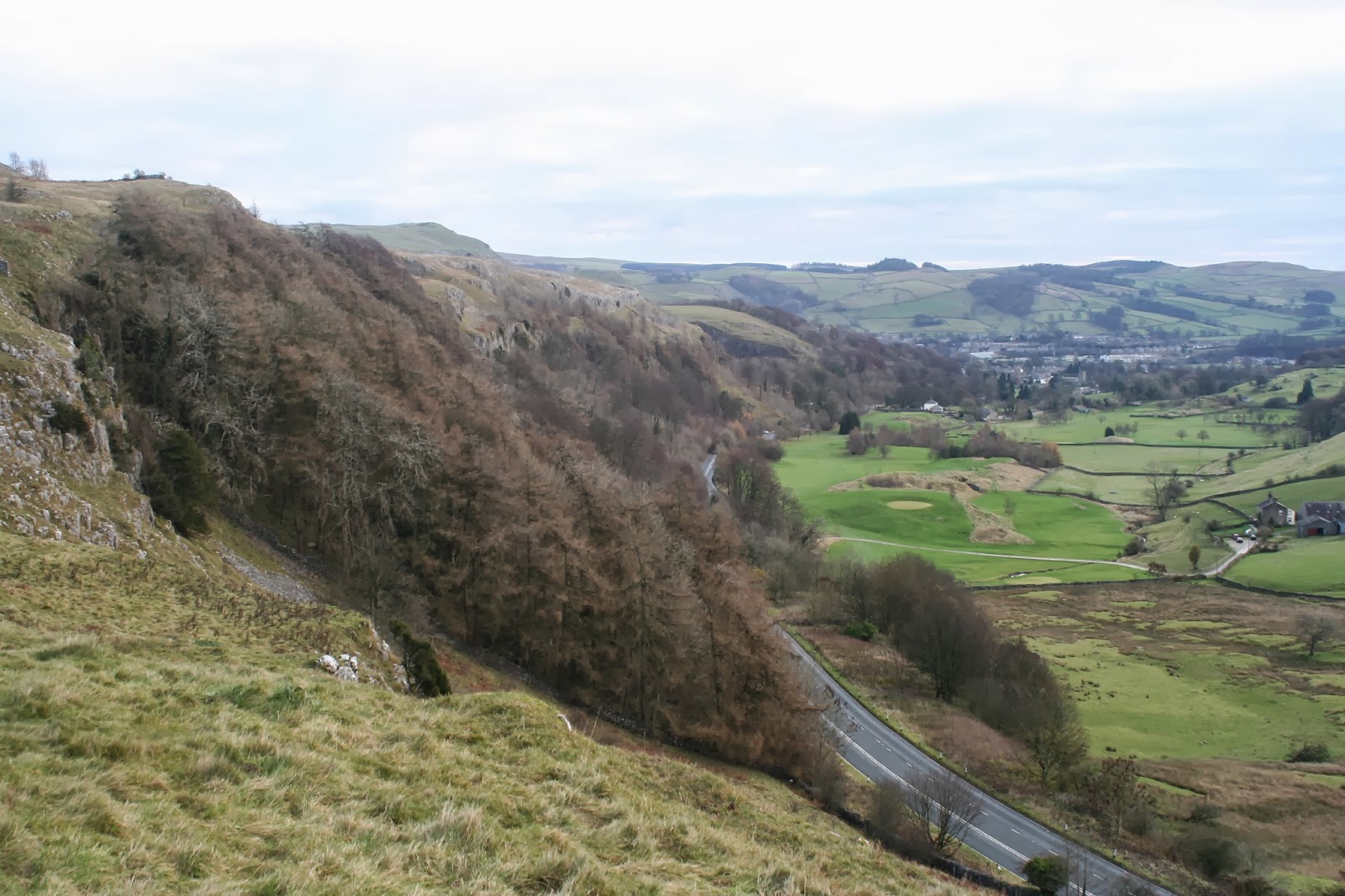 Dramatic evidence of the South Craven Fault at Giggleswick Scar, where the Great Scar Limestone cliffs effectively lie thousands of feet above the same rock now buried beneath the golf course. Stephen Oldfield

The South Craven Fault at first runs parallel to its neighbour before branching further to the south-east at Settle.  It is best known for forming the impressive fault feature of Giggleswick Scar, once a major submarine cliff looking out over deeper water.  The displacement or ‘downthrow’ of the rocks along this fracture is even more dramatic. The limestones now buried to the south of the fracture, way below the Ingleton Coal Field or below Giggleswick Golf Course– lie an incredible 1200 metres (4000 feet) lower than those north of the fault line! In total, then, the overall movement from the pavements of Scales Moor to these buried limestones is no less than 1800 metres or 6000 feet.  Clearly these major faults were on a stupendous scale.

The Mid Craven Fault ‘step’ branches off from the South Craven Fault at Settle, its uplifting being responsible for Castleberg rock, overlooking Settle, the wonderful scenery of Warrendale Knots – and the most famous limestone features in Britain, at Malham Cove and Gordale Scar.